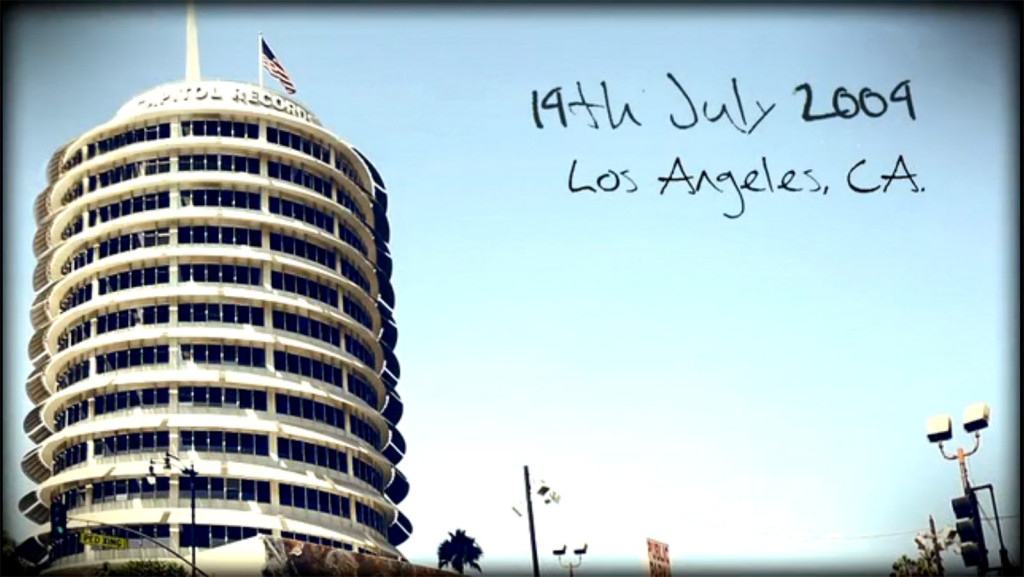 It’s somewhat reassuring that 15 months into a tour, things are still moving on enough to keep life interesting. The stadium shows are approaching, which means that preparations and disaster avoidance are well under way in all departments. As a little taster, the Los Angeles show is a big outdoor venue. More specifically, The Home Depot Center, in Carson, CA.

I should have sussed that it would be a big place when my friend Brian (the coder of this very website, no less) said to me “That’s where the local football team play”. Rather than imagining a football stadium, the vision in my head is more of a park where the Sunday league cough out their hangovers. The penny only drops when I arrive in the afternoon of the show and sure enough, it’s a proper sports stadium.

Being as I’ve come in a little early in a cab, I have no idea where I’m going. The security at the gate seem to have only marginally more idea. Eventually, I’m told to follow signposts for “Track and field”. The sporting theme continues as I head for catering to start the afternoon with a double espresso. Those of you who follow the Coldplay Twitter will already know, but for the rest of you, I was delighted to find that catering was today on a tennis court. Most disappointed to find a complete lack of strawberries and cream, though…

Now, I don’t know if it’s just me, but stadium shows always seem to smell very strongly of the seventies. It’s all huge cavernous backstage corridors and you can’t help but expect Elton John to wander around the corner in a pair of glasses bigger than a pool table, with boots and bellbottoms to match.

Now that’s not to say that I’m against either stadium gigs or the seventies. In fact, a misspent youth and an appalling record collection will tell you otherwise. I decide to hang out at the top of the concrete ramp that leads to the stage and watch the fellas make their way out there at showtime. It feels immense before the first sparkler is even lit. 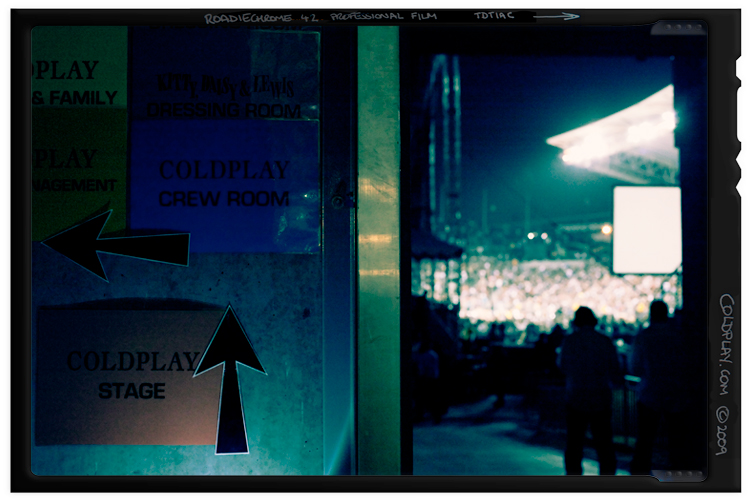 The show goes on to re-affirm what we’d all begun to suspect when we first hit a stadium way back in Tokyo on this tour. We did stadiums a few years ago and there was sometimes a feeling that the band had maybe bitten off more than they could chew. This time round though, they’re swallowing it whole and coming back for more.

The ending to Yellow has become a huge (if not entirely serious) communal singalong moment in the set and tonight sees it explode into a full on silly over-the-top rock ending with the kind of ridiculous drum-fills we only usually see from Mr. C in soundchecks. It can’t fail to raise a smile and I’m sure Elton would be proud…

It all feels like a band truly in its moment, though. When the Viva backdrop unfurls like a huge revolutionary flag at the start of Death and All His Friends, it gets its very own cheer as though the night itself has been one long victory celebration. All this without the production embellishments Mr Paul Normandale will be bringing along when the stadiums proper begin in Europe. Can’t wait.

In the spirit of keeping things interesting, there’s nothing like a quick “two gigs in one day, in two separate cities” to keep you on your toes. The band have been booked in to do a radio recording at the Capitol Records building to a very small audience. Beyond this, details have been decidedly sketchy. Eventually, the day is upon us and things begin to take shape.

It’s actually my first visit to the Capitol Records building. It’s such a completely iconic structure in both the LA skyline and the music business, that like a Beatles song or a Pink Floyd album cover, you can’t help but feel like you’ve known it all your life. 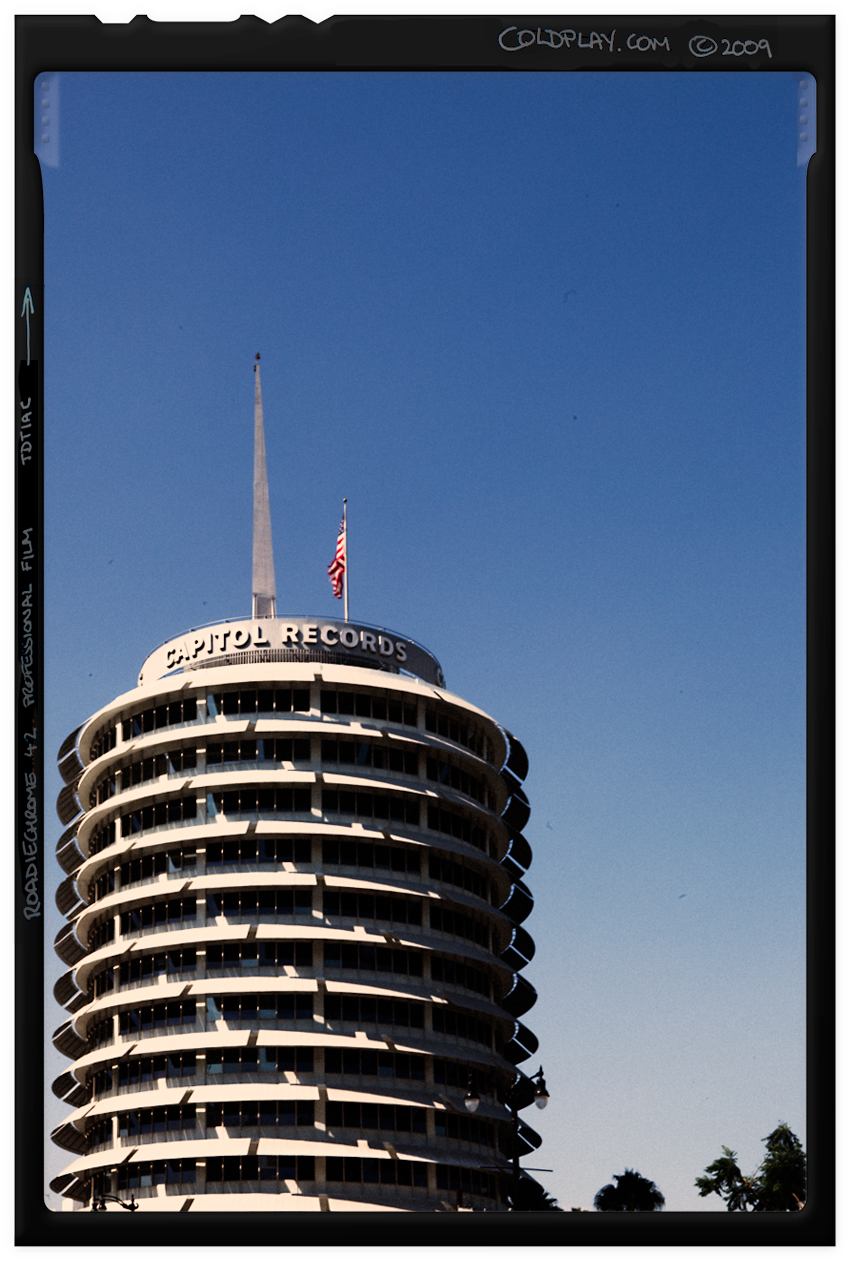 The show is entitled “stripped”, so the band are doing it in a largely acoustic fashion. Chris admits during the show that these kind of things are more nerve-wracking than the big outdoors gigs. Hardly surprising really, given that they’ve been rehearsing the big gigs for a year now, whereas the rehearsal for this? Erm, well, I’m sure they discussed the setlist in the van down here…

As far as instrumentation goes, there’s a small upright piano, some acoustic guitars and for Mr Champion? Well, he starts off with a cardboard tape-reel box (and given the history of this place, I guess I really should have read the label…). He soon discards this and upends a dustbin, before finally settling on a huge empty water bottle from the cooler in the corner. It’s rough around the edges and somewhat shaky to begin with, but once they find their feet on Viva, it’s clearly going to be a win. They go on to do some of the C-Stage favourites in fine form before pointing out that it’s time to head over to get back to the day-job.

There’s two choppers to get us to the Irvine show. Chris jumps in the smaller of the two with Hoppy, Chris Wood and Geoff, while everyone else piles into the bigger one. When Will enquires as to where the singer has gone, Phil considers that he may have chosen to take the crew ‘copter to make sure that if something happened to one of the two choppers, “at least the demos for the next record will definitely get finished”. With that cheery note of optimism, we pull away for the evening show.

It was a bit of a chaotic day, but actually a nice change from the norm. Besides – any day with a helicopter trip over LA as the sun sets can’t be all bad… I’ve knocked together a bit of video that I’m quite pleased with. Don’t forget that the button at the bottom right (the white one with the four arrows pointing out) lets you see it full screen.

So, that wound up our west coast activities for the time being and brings us down to Texas. We arrived here in the insane heat and I opened my flightcase to find that all of the plastic storage cases I bought a few months ago to keep me blissfully organised had melted in the heat and are now useful only for storing banana-shaped objects. Oh well, it was nice while it lasted…

Now, I don’t want to descend into that terrible British “aren’t Americans bonkers?” thing, but it tends to be the differences that you notice after this length of time away. Now firstly, I have to tell you that I opened the room service menu this morning (yes, yes I know, I’m supposed to be giving that up, but the hotel appears to be in the middle of the world’s largest golf course and walking to a diner requires a map, compass and sturdier boots than I have with me). Sorry, where was I? Yes, room service menu. Now, call me out of touch, but burgers for dogs? I mean really…. 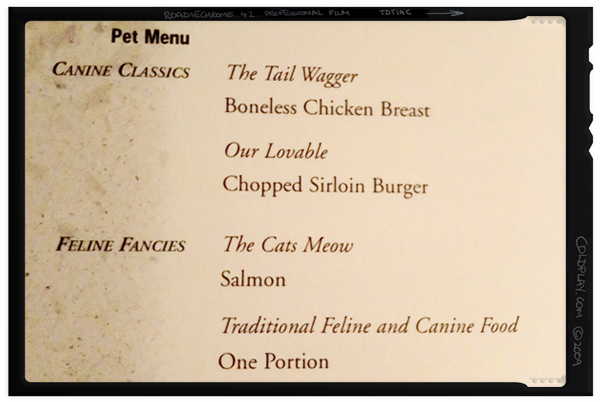 Which brings me to our most recent show. Halfway through the Houston gig, Neill tells me that Rik and Russell, the show’s carpenters were up in the roof and saw a racoon running across the lighting grid. Now, we’re not talking something the size of a squirrel scurrying about above us – in fact, it was so big that they initially thought it was a dog up there. Somewhat concerned, they spoke to one of the venue folks who told him that it in fact lives up there quite happily with it’s family and doesn’t mind the noise one bit.

Now, you certainly don’t get that at Wolverhampton Civic. I just wonder whether he was wandering about to get a better view of the show, or if he was peckish and popping out for a burger?