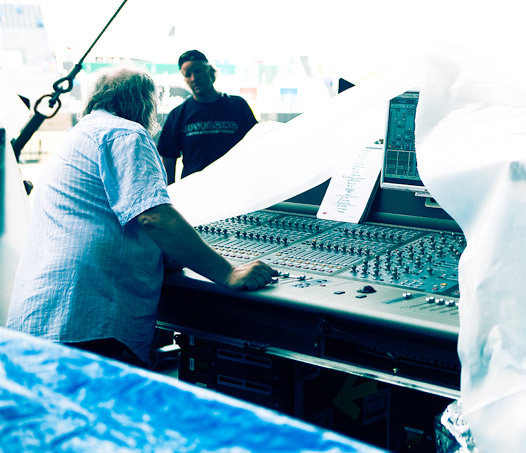 So, we’ve been home a week now. I managed on day four to move the suitcase from blocking the front door – I still haven’t got round, though, to the rather dull looking pile of bills, final demands and other junk mail that’s accrued during my absence.

Going from constant motion to utter stillness is obviously a treat. It also begins like many other blocks of “free time” with great intentions. Inevitably, the opportunity to rest and recover overtakes everything. I’ve heard the very end of a tour being described as being like “getting fired out of a cannon at a brick wall”. Perhaps a little over-dramatic, but not entirely inaccurate.

Tour breaks, then, are a little less extreme, but still involve some adjustment. A better analogy for me in this case, would perhaps be that I’m on a tug of war team and the other side has just let go of the rope. A general falling in a heap and wondering what’s next is unavoidable. Time to let go of the line, dust yourself off and maybe get a drink…

Some have booked holidays. Although the idea of getting on another plane and checking into another hotel doesn’t immediately appeal, it is a great way to force the mind and body into relaxation quickly.

I actually find the tying up of loose ends under zero pressure quite relaxing. I guess it comes from actually enjoying what I do. Being as I carry out several roles on the tour, there’s always more to do than time available, so a lot falls through the cracks. It’s nice to pick up the interesting bits and play with them just for the hell of it.

To that end, I’ve dug out the few lines I wrote in the airport lounge in Abu Dhabi about the last show. It was certainly one that none of us there are likely to forget, documenting it therefore seems important. OK then, when I count backwards from three, you will wake up in the United Arab Emirates seven days ago. Three, two…..

It rained a little at soundcheck. Nothing torrential, just enough to let us know that it was worth being cautious in covering everything with plastic sheeting. We’re hopeful that it’ll be enough to keep the dust down and by showtime, we’ll be back to balmy desert heat. 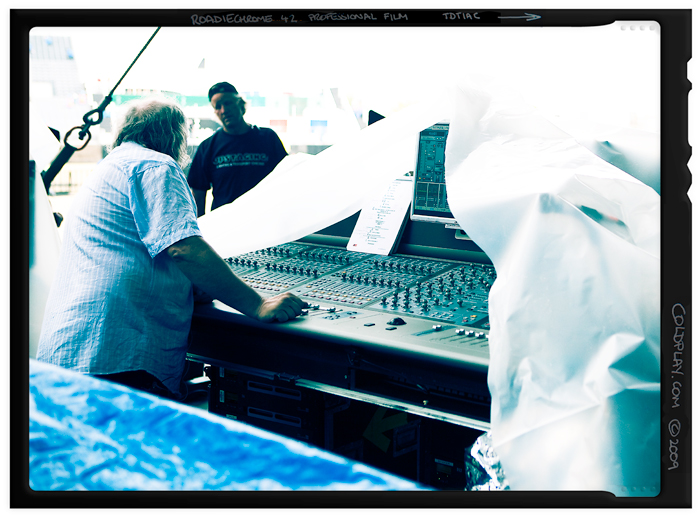 The hotel is just up the beach, so I head back up to my room in order to get my luggage ready. We’re bailing for the airport as soon as the gear is packed. As I wander back down the marble corridor to the beach path, there is a huge burst of light outside the window. I first think lightning, but tell myself it was far too intense and too close – it must have been a camera flash.

I’m halfway down the beach path, when the sky explodes like god’s own strobe light. The entire sky is bright neon white. The arc that shoots across my vision is so bright that when I close my eyes, it’s still burnt into my retinae. I ponder the wisdom of going to climb inside the huge steel cage of the stage for the next few hours. Is it safer or less safe to be standing in a huge steel box in the middle of a desert storm?

Mercury Rev go on in the midst of the first downpour. There’s a lot of anxious talk over the radios. Word is that if it’s still raining like this when Coldplay being their set, the B stage and the C-stage will be cancelled and done under cover on the main-stage instead. Marguerite is reading weather forecasts direct from the laptop to the whole crew at regular intervals on channel 1.

When a tour is this far in (we passed our hundredth show recently, remember) it can be easy to fall into a routine and some nights find yourself almost too relaxed and needing to slap yourself into concentrating properly. No such trouble tonight, obviously. Today, everyone is fully alert, very deliberate in all of their actions and aware of the plethora of possibility for things to go very wrong.

At the back of everybody’s minds, is the fact that we have some very big outdoor shows to do this summer. If this goes badly, the storm clouds that hang over us tonight will remain in our minds over the outdoor shows to come. We’d plainly spend three months expecting every one of those shows to be a horrible nightmare. It’s important that all goes well tonight.

We’re a frazzled crew that’s been bounced in a game of timezone table tennis over the last six weeks. Today we’re all counting down the hours until we’re home. Everyone had this pegged as a nice day in the sun to break up the journey home. Not quite.

Mercury Rev suit the drama of the night perfectly. They play a blinding show, as if this is what they’ve always wanted for a light show. They finish up their final show with us and a grinning Bash comes over and shouts into my ear, “Fuck I’m gonna miss them”. I’d say that goes for us all…

Time then, to make the show happen. It’s raining steadily and Marguerite’s weather reports inform us that they’re confident it’ll get heavier. The main questions are obviously whether the B and C stages will happen. Back here on the A stage however, things aren’t exactly watertight. We’re in a desert location that rarely sees heavy rain. Consequently, the roof is just basic shelter. There’s a lot leaking in already. The video department are having a hell of a time. One of the leaks is directly above one of the stage “globes” which means the internal projector is being doused and worse, the ball itself is could become a huge water balloon.

Poor old (he’s not old, he’s just from the middle ages…) Chris Wood, he’s near the open front of the stage and directly below a sizeable gap in the roof. He mixes the sound that the band hear in their “in-ear” headphones. He does it through a completely digital desk that will doubtless not take kindly to a soaking. He does most of the pre-show linecheck completely under his plastic sheeting.

The lightning remains in full effect throughout the first few songs. Clocks, I remember being particularly amazing visually. Lasers hacked through the downpour, whilst the lightning drew across the sky like a huge neon fireworks display all of its own. I’m aware that Paul Normandale (the show designer who has given Coldplay such a wonderful unique and distinctive look this time out) is out in the mix tower. I expect he’s wondering how you could get the lightning to work a bit more in time with the music and grinning to himself.

When Yellow kicks in and all the lights fire out into the crowd, two things become obvious. Firstly, the rain is punishingly heavy. As the beams push out from the stage into the night, they show up exactly how hard and unremitting the rain is. It’s so dense that it’s difficult to see the back seats.

More interesting, though, is the second revelation. The crowd are still going absolutely nuts. Fair play to this lot, they’re here for a good time and absolutely nothing is going to stop them. There are folks on each other’s shoulders, people are cheering, singing and having a great night. Absolutely amazing response. Nobody could blame these folks for giving it a miss, or just turning up and cowering miserably under their coats wondering whether they should have really bothered.

They’re amazing. We’ve had many great crowds on this tour, and even on a dry and regular day, this lot would be amongst the top ones. The fact that they’re going for it in such grand style on such a miserable night wins them full marks all round.

The band clearly appreciate the energy they’re being fed. Chris spends a good portion of his time out on the ramps getting completely soaked, showing solidarity with the drenched punters. With the rain so insanely heavy, the decision has been made that the B and C stage are coming onto the main stage. Folks are rushing round making the necessary logistical and technical changes to make this happen.

Bash relays the word to Will so the band know what’s going on. For a song or so, things continue. Will then shouts down his mic that comes only to the crew’s ears. “We have to do the B and C out there”. He’s made the decision and there’s no questioning it. Off scurry a bunch of folks to reset things before Strawberry Swing comes to a close.

Now, this point illustrates Coldplay very well. They get a lot of stick for being “soft”. The fact is though, that they have balls. I’ve never seen them take the easy option. Nobody would blame them for playing it safe here. They know, though, that the gig will be better if they’re out there giving the punters the whole show, rather than bottling out and keeping dry. Note that Will said “we have to”. Not “we probably should” or “can we try”. This is as good an indicator as I can give of how things are done round here.

The B-stage is greeted with such massive applause that it’s immediately obvious this decision is going to lift this show right through the roof (that is, if there were one…). For The Hardest Part, Chris spots someone in the crowd who’s birthday it is tonight. Just for the sheer hell of it, she’s brought up onstage and given a seat to his right.

I do remember Chris playing a rather excellent rendition of Singing In The Rain at one point. I’d have loved to have included an mp3 here, but the computer I record the gigs on made it about three songs into the deluge before losing its nerve completely and collapsing in a heap.

The C-Stage comes as an undoubted highlight. There’s no bigger show of unity with the crowd than when the band are a little dot of light in amongst it all – floating just above the sea of voices. It’s not without technical imperfections, but for emotional impact? Flawless. 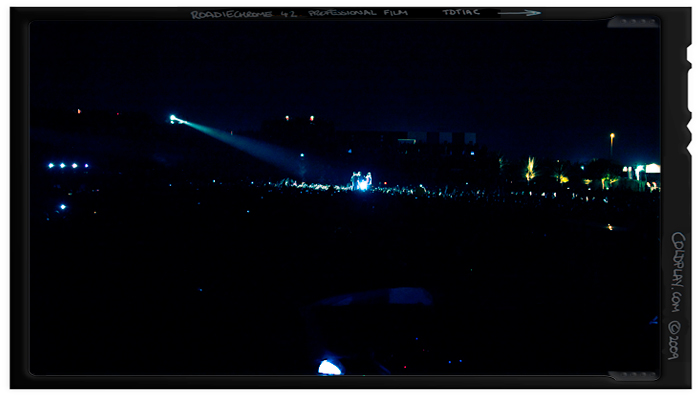 I’m crossing the stage with my camera, as Stage Manager Kurt takes the opportunity to mop up the onstage puddles whilst the band are out in the crowd. As I pass Guy’s mic, I bump into none other than Phil Harvey on his hands and knees mopping away with a fistful of towels. Trooper… 😉

Adversity often bonds and brings out the best in folks. The show ends and the overwhelming feeling that it’s been a huge victory all round is unmistakable. I bet we have some extremely unpleasant outdoor conditions this summer, but quite frankly, you can bring it on….

From chaos to beauty