Coldplay.com chatted to Guy amidst thunder and lightning in Dubai 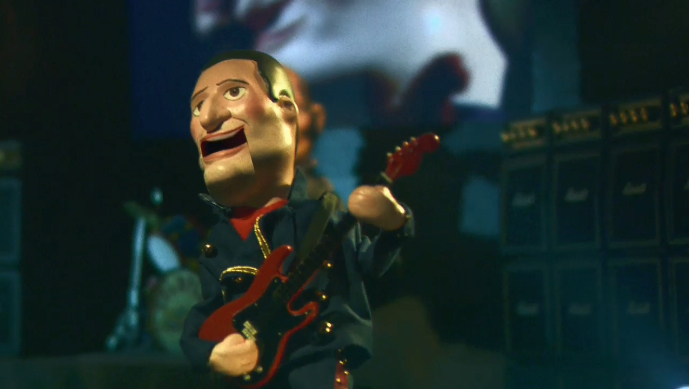 Hello Guy. How are you?
I’m good, thanks. I’m in a car on my way to Dubai airport. We had a very interesting gig tonight.

How long ago did you finish it?
About two hours ago.

This was the gig at the palace in Abu Dhabi.
Yes, but the venue was actually outside, what with this being one of the hottest, driest countries in the world. But about three songs in, the heavens just opened and everyone was getting soaked. It was pouring with rain and there was crazy thunder and lightning.

Presumably they’re not that well prepared for that kind of thing.
No, they’re not. But it was good, though, because everyone just gritted their teeth and went for it. And Chris changed a lot of the words of the songs to reference rain. It ended up being a really, really good show, actually. When you have an obstacle like that, it just pulls everyone together. During Fix You it stopped raining and I think everyone was so happy that the whole mood lifted even further. It was a really good way to end this leg of the tour.

Has it been a good set of gigs?
Absolutely. But we have had to do a lot of travelling over the last couple of weeks, from Australia, to New Zealand, then to Singapore, Hong Kong and Abu Dhabi.

It’s been a long trip.
Yeah, it’s been five weeks, which is about our cut off point, really. But we’ve all had the kids out staying with us, so it’s been a bit more manageable.

It looked like the Sound Relief gig in Sydney went off amazingly well.
It really did. We did the song with John Farnham, which I thought sounded really good, and we were just happy to be involved. Hang on, let me describe to you what I can see right now. There are loads of big skyscrapers, with masses of fork lightning going right across the sky around them. It’s crazy!

A bit like Chris’s run into the crowd at the Sound Relief show…
Yeah, I think it was a bit silly in a certain sense, because he hadn’t told anyone that he was going to do that, so nothing had been prepared. I think he ran into difficulties because by the time he made his way back, he’d amassed a rather large gathering around him, which he had to fight his way through. And then it was quite funny, because he’d run out of energy when he got to the fence at the end and he couldn’t quite pull himself over it. But I thought it was really good. People love that sort of thing.

Have you watched it on YouTube?
Yeah, I did. Literally everyone just chases him. It’s very funny. But it was a great day. In fact the whole Australian trip was brilliant. That’s definitely the most fun we’ve ever had down there. They’re fantastic crowds.

And how was New Zealand?
It was good, although it was all crammed into two days, so we just kind of flew in, stayed in Auckland, did the show and then flew out again. Although, saying that, I did get invited out on a boat by some friends of friends. We went over to an island, where we went swimming and fishing. Arlene [one of Coldplay’s management team] caught some snapper, which we ate as sashimi about half an hour later on the boat. It doesn’t get much fresher than that!

It’s good that you had time for some sight-seeing.
It is, yeah. But I would’ve liked to explore New Zealand a little bit more. I’d like to go down to the South Island. Everyone talks about that. Maybe we’ll get down there next time.

It must be a bit heartbreaking to be in these amazing places and have to leave so quickly.
Yeah, it can be a bit frustrating.

Were Hong Kong and Singapore similarly rushed?
No, we had a few days in Singapore. We stayed in a really nice resort called The Sentosa, where everyone enjoyed getting some poolside action and going down to the beach. And I went into Singapore and had a walk around the markets, which was really interesting. Hong Kong was good too. I’ve got a friend out there, Dominic, and we had a day off there, so he took me around. We haven’t had any spare time there before, so I quite enjoyed that. They do a light show at night on all the skyscrapers, which was great.

Have you been taking lots of photos?
Yeah. I’ve got a bag full of films which I’ll be sending to the lab. So we’ll see what comes of that.

Have you decided what you’ll do with all the photos you’ve taken on this tour?
I’m just going to keep taking them, then see what I’ve got at the end. Trouble is, with all the arena shows, you end up taking the same pictures over and over again. So it’ll be nice now that we’re going into bigger venues. I can come up with some different ideas.

How’s the planning going for the stadium shows?
We actually had a big production meeting today with all of the relevant people involved and went over all the plans. We’ve got some computer renderings of all the ideas and we’re all quite excited about how it’s looking. We’re just working through a few logistical difficulties with some of the ideas that we’ve got. But I think it’s going to be really, really good.

When you played the big shows at Crystal Palace and Bolton’s Reebok Stadium in 2005, Chris said he didn’t think the band were quite ready for stadiums at that point. Do you think you are now?
Definitely. Just because we’ve seen what works in our arena show and we know why that’s successful. All we’ve really got to do is take the same principles of the arena show and make things a bit bigger. I’m think they’re probably going to be some of the best shows we’ll ever do.

It must be nice to have a new challenge too.
Yeah, it’s nice to have something new to aim for. In fact, Hong Kong was our 100th show of the Viva La Vida tour. That’s counting from Brixton.

You’ve done 100 gigs in nine months.
Wow. That is quite crazy actually.

We hear you’ve been experimenting with a few of the older songs in soundchecks.
Yeah, we’ve been trying to dust the cobwebs off here and there, because the idea is that for the bigger shows in the summer we’ll play for a little bit longer. So we’ve been digging out some of the older songs which we haven’t played for a while. That’s actually been really good fun. We played Sparks today and we’ve been playing Rush Of Blood To The Head, Warning Sign and White Shadows. We’re just building up the songbook, basically.

Are there any songs you’d personally veto?
No, not really. It all comes down to where things fit in the set. I think we’ve learned that if you’re not enjoying songs, they’re probably not in the right place in the set.

Presumably it’s quite hard to swap the setlist about at a big show – because the lights and background films etc will all be set up for particular songs.
Exactly. You make a decision and then you largely stick to it. But on the C Stage we can decide what song we’re going to play on the spot, which is quite nice. I’m sure we’ll be keeping that C Stage idea going for the big shows.

You were joined by [legendary Australian cricketer] Shane Warne for one of the C Stage performances in Australia.
Yes. I think he contributed more in spirit than in musicality! He’s such a great guy, though. He’s become a very good friend of the band.

You’ve got a few weeks before the next shows. What are you doing during that time?
We’ll have some time off to recharge our batteries, then I think we’re going to be doing some more work in our studio. Plus there will be more planning to do for the big shows.

Have you been working on the new material while you’ve been on the road?
We’ve worked on a few ideas in soundchecks, but when we get back into the studio we’ll be able to pick up where we left off with Brian before we came out here.

Did you enjoy touring with Mercury Rev as much as Will did?
Definitely. We got to know all the guys really well. We went out socially and swapped numbers and emails. It’s really nice when you go on tour with a band and you actually make a connection. We’re definitely going to keep in touch and it’d be nice to play some more dates with them in the future.

The Coldplay-shaped puppets were on the trip too. There’s been a lot of talk amongst fans about the Guy Berryman puppet. What do you think of it?
Well, I maintain that I got a raw deal, actually.

That has been the general consensus. You’re a good-looking chap, with a less-than-attractive puppet.
Haha! But then I do appreciate the fact that they’re supposed to be based on the traditional Punch and Judy characters. Hence one of them had to get the more traditional Mr Punch-shaped face. But it’s alright, I’m over it now.

Perhaps it was an inverted compliment; the best looking member, gets the ugliest puppet.
Oh right, OK. I hope so!