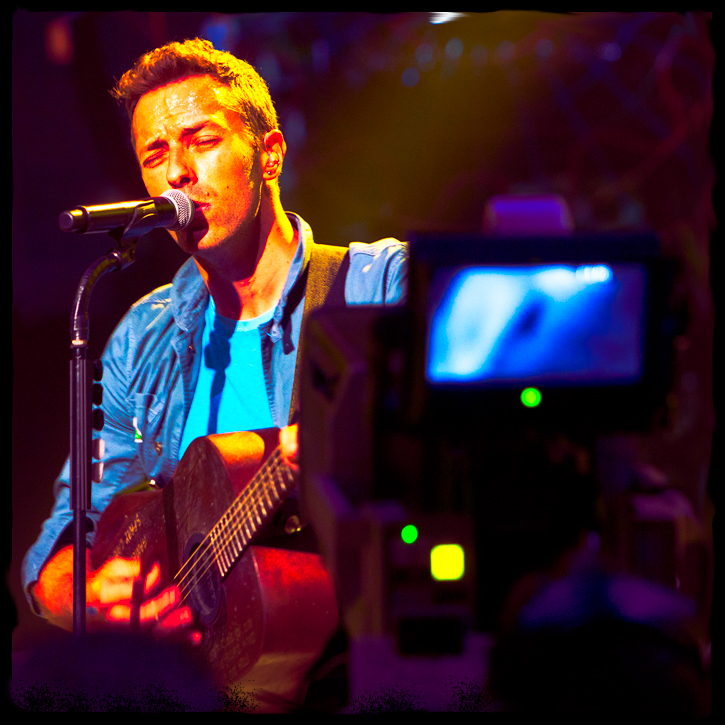 The customs officer at Houston airport greets us with a cheery “howdy”. One of his colleagues shouts over, pointing at the entire entourage, informing him that non-specifically and collectively “this is Coldplay”. It turns out that our guy knows of Coldplay. He’s even got one of the records: “The one with all the old soldiers on the front”.

For reasons that are never made quite clear, he’s bought it five times now. It’s certainly not the coldest welcome any of us have ever received from the TSA, so we thank him and move along.

We’re on a layover at Houston airport before a short flight to Austin. It’s been a long flight from London and the time difference is just enough to make things feel spacey. It’s mid evening here, but deep into the night where our bodies think they are.

We’ve been allotted a conference room in the airport lounge. A huge heavy oak table with massive, overstuffed swivel chairs. The over-tired state helps this to be far more hilarious than it really should be.

Mr Berryman takes the head of the table and fiddles with the speakerphone. “Get [Coldplay manager] Dave Holmes on the line, let’s do a conference call.” Will suggests doing some mediation and Jonny asks for a phoner interview to do. (Surely the first time – and doubtless the last, that Arlene from management will ever hear Jonny *ask* for promo – her job being to drag the band into doing press like a parent pleading for vegetables to be eaten.)

We’re in Texas, of course, for Austin City Limits. A cab driver in town informs me, that Austin is the “live music capital of the world”. Well that explains the quality of the crowds at least…

The band have two shows here, each very different. The first is a taping for the Austin City Limits TV show. This takes the form of a TV show in a smallish theatre. A small stage, with the crowd right up close and personal.

The ACL TV show is a wonderful thing to experience. Being a “public access” show, this is less of a high budget corporate affair than many TV shows and hence staffed entirely by folks that are here because they genuinely love it and have a passion for music. This isn’t to say that we don’t do TV shows elsewhere that have great people involved – it’s just that the spirit of the thing here is very tangible. Very warm and very much geared towards great music and great performances.

It’s a huge shift from the vast outdoor shows they’ve been doing lately. It’s “whites of the eyes” stuff, for sure. The theatre has a couple of balconies, but they’re not really visible once the lights go down for the show. This increases the feeling of intimacy greatly. The vibe is almost like a club gig, now. 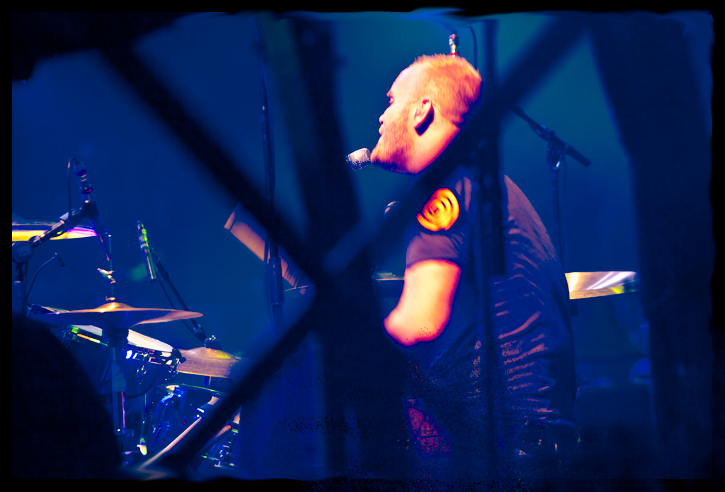 For this reason (from my corner at least) the rockier, more straight-ahead band tunes like Yellow and God Put A Smile seem to resonate really powerfully here. From the new stuff, Hurts Like Heaven really sits well in this context, exploding into life and bouncing off the walls with all the urgency and excitement of a band hungry to prove themselves in a grimy little dive.

Come the quieter acoustic moment, it almost feels as though they could have done “Us Against The World” without any amplification at all – just sing up a bit and hit the guitars harder and even the back row would have heard them. 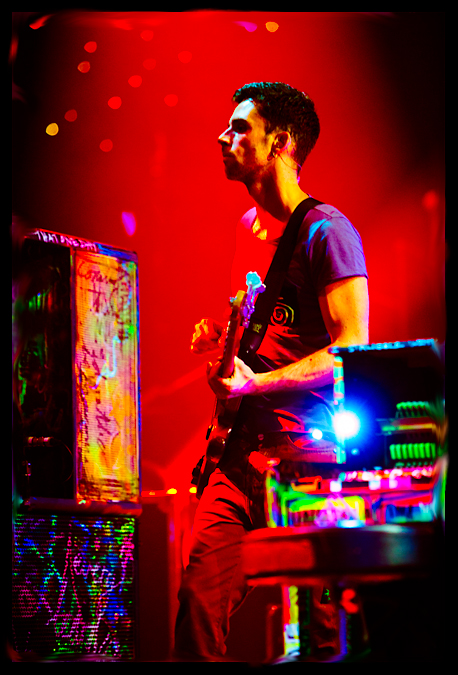 Up In Flames gets its first ever public outing. Unfortunately, you’ll have to wait until the show airs on New Year’s Eve to see how it went – but I reckon it was a winner.

The NYE moment is announced and the special stage set that they’ve created for the band is lowered in from the roof. It looks splendid in the UV lights – like multiple layers of luminous space junk.

The second show here in Texas, is the Austin City Limits festival – huge stage, full production and a massive crowd. The front row here almost as far from Chris’ mic-stand as the back of the room was the previous day.

Perhaps it’s for this reason that during Fix You, Chris makes the insane jump nearly ten feet to the ground and up the barricades towards the mix tower. It’s chaos all around. The radio mic is lost in the throng and Kelly, Chris’ ever vigilant security chief is next off the front of the stage. Meanwhile the rest of the band are wondering whether he’ll make it back for the final line (remember Sydney?).

It’s a chaotic show too, in lampy-world, stage-right. There’s all manner of problems up in the truss and in one of the quieter songs, the entire overhead lighting rig is disconnected from the power in an attempt to reset things. (“Turn it off and turn it on again” isn’t just the realm of IT folks…)

It’s touch and go whether the system will be alive again in time for the onslaught of Politik. I look around at the crowd of black-clad roadies gazing heavenward. It looks like some ancient tribe waiting for the gods to appear above them. Time to neck some peyote and start chanting…

Will clicks his sticks together to count the tune in and there’s a collective crew-gulp. I didn’t see anyone crossing themselves, but that may have been because it was too dark…

The band crash in and the rig dutifully blazes forth the lightning storm required for this tune. The relieved exhaling all around shifts the dry ice offstage a good few feet. Beleaguered Production Manager Wob Roberts shakes his head at yet another disaster averted and heads back to the production office – presumably to wonder what normal people do for a living.