Join a road-crew they said. See the world they said. Exotic locations and glamour they said…

I would never have dared dream, though, that if I worked hard enough, one day I’d find myself in a disused bucket factory in Brooklyn.

In reality, the place where we find ourselves actually has a pretty spectacular view of Manhattan and is in the process of being transformed into a shabby-chic TV studio. We’re here for “Hamish and Andy’s Gap Year” an Australian TV show being filmed here in New York.

The fellas have done several things with Hamish and Andy before and they’re always a good laugh. After soundcheck they come and chat to the band outside the dressing room and the laughter is genuine and clearly audible right down the hall.

This mood continues through the warm-up. Rather than the usual vocal exercises, Chris seems to have commandeered the piano and started doing a rather “oom-pah” version of “Living On A Prayer”. Whether it’s the proximity to New Jersey that’s brought on the sudden Bon Jovi influence, I’m not entirely sure. It seems to be out of the system by the time they come to perform, though. Probably for the best…

In addition to a short interview (which takes place three times due to dodgy radio mics) and the song (Every Teardrop…) there is a short segment where Chris is required to try firing a t-shirt from the street below through an open window and into the studio. I’ll let you track down the TV show for yourself to see how he got on. 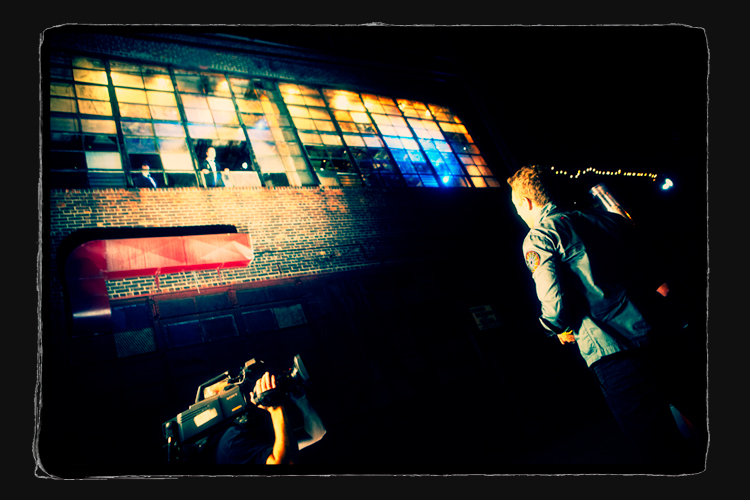 TVs are long days with huge amounts of hanging around, so it’s a great relief when we finally arrive back at the hotel. I walk through the doors into the lobby with sound-man/co-producer Dan Green and do a massive double take as I recognise a face right in front of me.

It’s none other than Mr. Jon Bon Jovi himself. What are the odds? Dan Green and I pass by and head for the elevators sharing a look of disbelief. We head upstairs shaking our heads, with only an oom-pah version of Living On A Prayer rolling around our heads to fill the silence.

The following day sees us uptown for the David Letterman show. It’s a tiny theatre and we’ve brought far too much gear. My rig is set up in a tiny narrow corridor way behind the stage. I’ve talked before about gig nightmares and how everyone has their own tailor made bad dreams embodying every single thing that could make their particular job torturously impossible.

Somebody appears to have watched all of my gig-nightmares and taken notes. They’ve then gone away and designed today, then wandered off cackling.

The tiny corridor is massively busy, which means that I literally can’t get thirty seconds of work done without having to move away from my rig to let people past. Worse still, I’m miles from the stage and have no sightline to the band. I’m completely blind. In rehearsal, I can’t hear the presenter mic, meaning I can’t get my cue to start. The band pick up that things aren’t right and that gets nerves fraying and patience wearing. It goes on and on until I’m in a full-on swirling gig hell.

In the grand scheme, it’s nothing major and the band’s performance is great. The whole day for me, though, feels like trying to cook a four course meal in blindfold and boxing gloves.

But two things lift the whole experience. Firstly, the Letterman crew are lovely and extremely funny. It’s like standing in the middle of a long-running sitcom watching them work. They’ve got the same family vibe that a touring crew has and they rip on each other, have their own in-jokes and finish each others’ sentences all the time. They’ve also been very kind and patient with us, despite us ramming an insane amount of our gear into their home.

The second thing, is the encore. Setlists for the webcast to be filmed after the TV show have been going round by email for weeks. This has raised a wry smile in all quarters, everyone knowing how prone things are to last minute change. Indeed, the setlist changes twice during the day and then when the band are onstage, word comes round that they might decide to do God Put A Smile as an encore.

The band finish the set that’s on the printed sheets (wonderfully headed “Letterman Setlist FINAL -Version 2”). They stand in the corridor considering whether to go back on and the word comes round: “That’s it. All over”. No encore.

Roadies commence unplugging and switching off and then suddenly Chris is spotted walking back to the stage. Further chaos and pandemonium ensues as it transpires they’re going to do “Us Against The World”. Poor old Hoppy is legging it about stringing cable across the floor and pressing a guitar into Chris’s hands. Everything works and Chris does a funny intro – tension of the day dispersed. 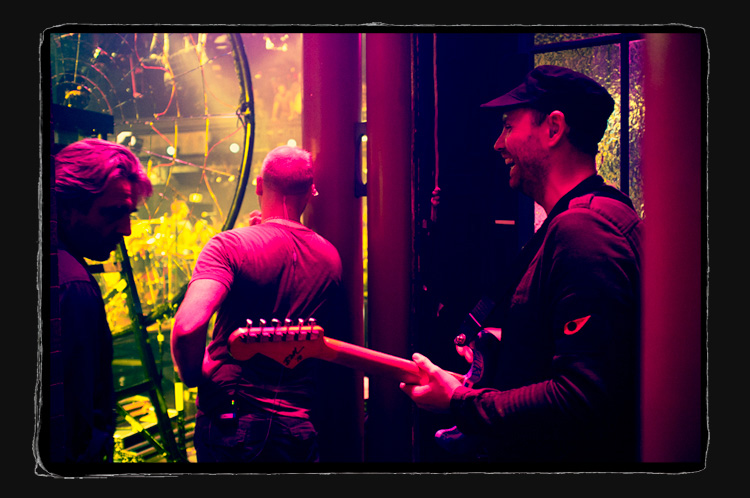 Then, for no discernible reason, the guitar pickup cuts out. I’m not sure if someone from the crowd shouted it out or whether it was Chris’s idea – but he decides to do it without the mics rather than wait for the fault to be traced. I did write in the last blog that he could have done the song in Austin with no PA, because the room was so small. If I’m honest, the idea came to mind from a recollection of a tiny club show in Tokyo in 2002 where he did See You Soon with the sound system switched off – so I reckon Mr. Martin can claim rights on the idea, whatever way it came about tonight.

It’s a small enough place that he can project and make it work. It’s a total pin-drop hairs-on-the-neck moment. Everyone is beaming as they watch – until suddenly it’s made clear that while this works great in the theatre, out in the sound truck for the webcast, no microphones isn’t quite so much spine-tingling as just plain silent. – Cue more chaos.

Slowly everyone joins in on stage. Will realises that Chris has taken the piano stool, so ends up kneeling on the floor. Jonny and Guy have their volume backed almost to off. The whole thing is just a joy to witness. Completely off the script, unplanned and ramshackle, but at the same time completely wonderful. Just the band and the audience sharing the moment.

I tried to run out into the crowd to get a camera going for you folks, but couldn’t do it without crossing the stage while they played. But of course, there was someone in the balcony with their phone in hand. Somehow, there isn’t a more perfect way that this could have been captured. I hope you don’t mind me sharing your video with the blog crowd dayi531. It’s a cracker.