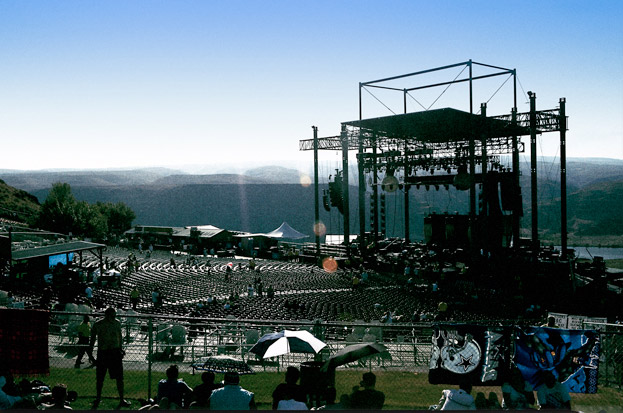 Greetings from scorching Sacramento, folks. It’s beyond warm here and we’re well into “living in an oven” territory. We arrive in the early evening and do what all good Brits do when confronted by weather warmer than “overcast with regular drizzle” – that is, we walk around pulling at our collars discussing with each other just how hot it is (in case nobody else had noticed). After a few minutes of ant-under-a-magnifying glass confusion, we find a nice, dark, air conditioned room and wait for it to cool off a little.

We were staying in San Francisco last night, so it made sense to drive down here today. We boarded a swanky coach and settled in for the two and a half hour drive. As we swung out onto the freeway over the bridge, the driver took the mic and introduced himself. To everyone’s amusement, he then began a tour guide voiceover, pointing out Alcatrazz, the Golden Gate Bridge and so on. Now, when you’re travelling for a few hours of every single day for a year or so at a time, peace and quiet is all you’re after. Bizarrely, a two-plus hour journey is one of the few times you’re sat still for any length of time – albeit sat still going at 55 mph. This makes it ideal “quiet time” to catch up with emails, get some work done or discuss upcoming work.

Our driver went on to explain how long the new bridge beside us would take to complete and what the shipping lanes are known as. The horror slowly dawned upon us, that he might keep this up for the entire journey.

I’m not sure if he picked up the vibe that people would rather be left to their own devices, or whether he caught a glimpse in his rear view mirror of Franksy with his head in his hands, head-butting the seat in front of him. Either way, the tourist-friendly views of San Fran gave way to the desert scrub and silence was restored once again. Laptops came out, headphones went on and all was well with the world once again.

So, tonight’s show is the fourth on this leg. We’re all just about accustomed to the time difference and we’re settled in like we’d never been away. (Given that our time at home was little over a week, it’s hardly surprising…)

So what can I actually remember that I can share with you? As ever, events are out of sequence and more than a little confused. All the more reflective of the touring experience…

Let’s see, we scream out of the Portland show in the customary race to beat the concert traffic. The band just about have time to discard their radio packs and in ear monitors before diving into the vans. The sweaty stage clothes they’re still in though, need to be returned to the venue so that Tiff can have them cleaned and fresh for tomorrow’s show. To this end, there is a car following behind us. The fellas change in the vehicles as we speed through the streets ahead of the crowds leaving the show.

After enough of a distance to get a good head start, we pull into a parking lot. There’s a couple of kids sat on a bench by the roadside. It becomes impossible not to wonder exactly how this looks to them: three blacked out vehicles have approached at speed. From one vehicle emerges Kelly, looking every inch the brick shithouse, Geoff from the other, each carrying a large duffel bag. Franksy, dressed in black, complete with pimp hat, oversees as the bags are thrown into the car window and the van doors slam shut again. This has to look like some extremely dodgy deal going down

There’s a great scene in Pulp Fiction where Samuel L Jackson’s gangster character, Jules, is held at gunpoint and asked “What’s in the bag?” His reply “My boss’s dirty laundry” can’t help but spring to mind…

I’m sure I’m not the first person to enthuse about the great beauty of the Gorge venue in Washington State and I doubtless won’t be the last. Being a desert, the heat was, unsurprisingly, intense. The view though, even more so. The stage sits above a natural river valley and the audience area slopes up in a somewhat rugged natural amphitheatre. The views as the band begins and the sun sets are nothing short of breathtaking. 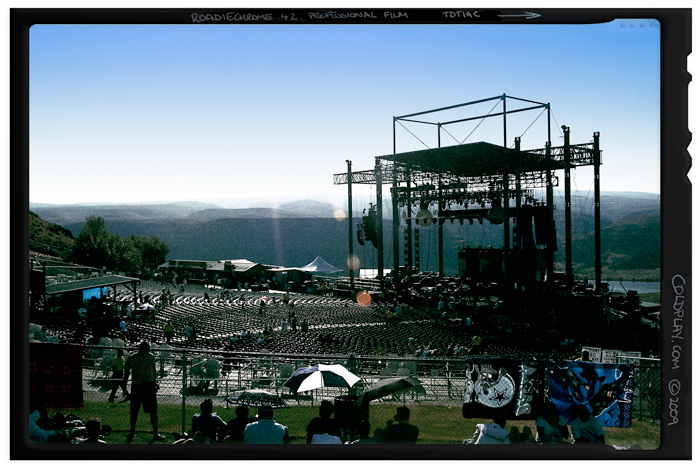 The “somewhat rugged” nature of the venue layout here is evidenced by the fact that the front edge of the “lawn” area forms a small jagged cliff. The view of the full house as the show begins is akin to one of those nature programmes on TV where there are thousands of penguins huddled on the ice caps. Rather than freezing in the Arctic, though, these folks are in shorts and bikinis, lying on picnic blankets and soaking up the view, the sun and the sounds. Without getting all hippy-dippy on yo ass, it’s hard not to have one of those tiny “yeah, ok, this is a cool job” moments as you feel the vibe go up and the sun go down…

This leaves us with last night. Shoreline Amphitheatre, just outside of San Fran to be precise. I’ll be honest with you folks, the only thing that mattered to me tonight was the presence of one Steve Jobs. I’m a confirmed Apple devotee and I really cannot imagine doing the job I do now (or even having got into this line of work) without my Macbook Pro (and all the Powerbooks that went before it). Creating these tools and putting them into the hands of folks like me was the vision of this man.

I spot Steve chatting with the band’s manager, Dave Holmes, outside the dressing room and suddenly feel like a star-struck teenager. In order to get the gall up to speak to the guy, I down a double espresso. The mixture of caffeine buzz and feeling like a cheesy little fanboy means that all I can manage to say to him is “Thank you so much”. I realise that I’m quite simply making a tit of myself and so excuse myself as fast as I appeared.

With that, I suddenly have sympathy for every nervous and excitable kid that shakes hands with the band at a meet and greet. Time to hit send and fold up the laptop.

A tribute to “Nettie”