The change of season has removed the permanent blanket of grey cloud from over London and we’re getting day after day of clear blue sky and blazing sun. Similarly with the record, the fog of infinite possibilities has lifted and, for me at least, the songs are appearing in a whole new light.

I guess it demonstrates the idea that nothing focusses a creative mindset more than a hard deadline. Although the festivals are still comfortably on the horizon, they’re marching ever closer with each day. This not only provides a solid target for having things tidy, but also brings plenty of spring-like new growth of its own.

Plans for how to present Coldplay live in 2011 are well underway, which means production meetings, old faces, new ideas and a whole host of very talented people from across the globe passing through the Coldplay world once again. Each brings a bucketful of ideas and concepts, some of which will become defining features of the tour, some of which won’t make it off the drawing board. All of it looks exciting at this stage, though.

The first sightings come on a trip to an aircraft hangar in the middle of the countryside where Production Manager Wob Roberts has assembled all manner of new gear and technology to assess suitability and potential for both the festival shows and beyond. I tag along to film proceedings to send off to band members who are on half-term with their families.

The hangar itself, I’m told, is situated on what used to be a hugely secure and secret military base. Here, boffins once prodded, wired and evaluated the next level of war machinery. By rather lovely and heartening way of progress, we found the place full of crazy-arsed roadies blowing shit up, running around with the hugest toys imaginable and generally making a wonderful mess in the name of creating a bloody good time for crowds of music lovers. Perhaps there is still hope for the world?

Back in the studio, the songs are now very much pushing their heads above the soil and straining towards the light. I suspect that the band has had a reasonable idea all along of how things will feel when they’re finished, in the same way that a sculptor sees the finished piece, but just needs to dig it out of the block. There’s been much chiselling and smoothing and now things are really developing a recognisable form and an emotional resonance.

There’s no better aural equivalent of the bursting growth of spring than the laying on of backing vocals. Brian is back in the fold this week and the fellas are gathered around the mic for much of the time. It’s a tremendous thing to get close up to. When the guys are belting it out with the track on headphones, all that can be heard in the room is the blast of harmonies. It’s huge, powerful and yet completely unaided by technology, just a pure, organic human bloom. 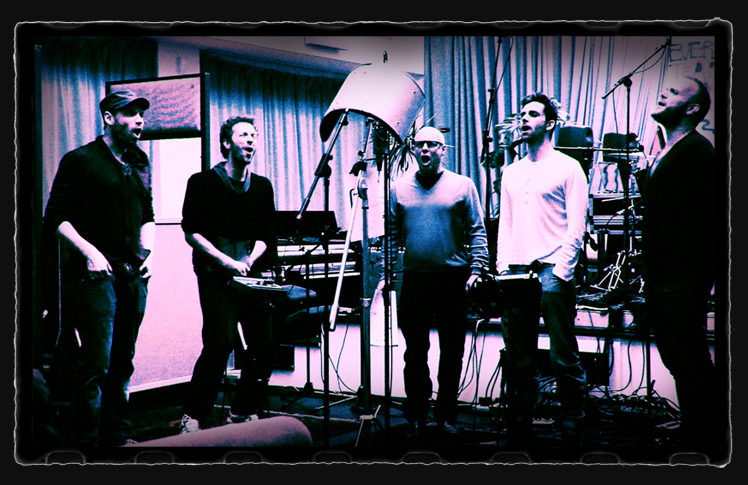 Other spurts of growth are taking place on the top floor, as Dav Rossi gives a few songs his string arranging magic touch. My office is next door, I hear Chris standing in the doorway of Dav’s room listening. “That’s amazing, just great.” He stays a while and listens, then heads off down the stairs proclaiming to no-one in particular: “Maybe this album won’t be so bad after all”.

Regular viewers will doubtless be aware that in terms of hyperbole and enthusiasm, that’s pretty excited talk around here…

I’d say then, that winter is well and truly behind us and the summer is shaping up rather well.

The first week back in the studio