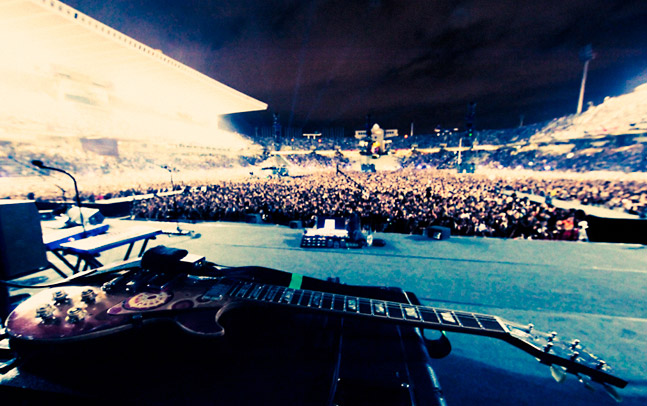 I remember somewhere back last year I talked about the band’s stadium show in Tokyo. It was an absolutely belting night and I wrote the following:

“You get the impression that the guys are on such a roll that the PA system could fail, the lights could go dead and they’d still carry on, just them and the crowd, too caught up in the moment to notice anything had changed.”

Roadie sensibility sometimes approaches the superstitious – so much so that phrases such as “tempting fate” and “touch wood” are commonplace and spoken with completely straight faces. It should come as no surprise then, that the chance to test out the bold claim above, comes on a night with 64,000 punters and a bunch of cameras filming for an as yet unspecified project. 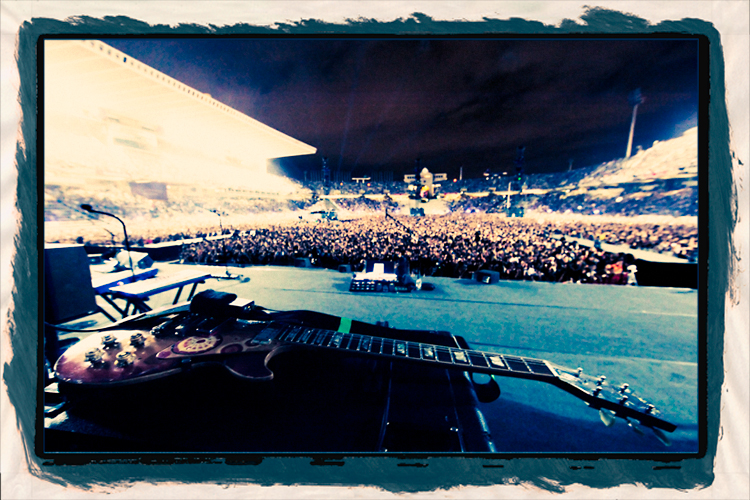 The band take to the stage to absolutely deafening cheers. If any crowds on this tour have actually sung the opening melody from Life In Technicolor, they haven’t done it as loudly as this lot. I’m underneath the stage and I can hear them. Great night, guaranteed.

There I go again….

Suddenly, as the band hit the huge thumping chords before the verse of Violet Hill, something is plainly up. Intermittently, I stop feeling the thud of the bass through my feet. From where I am, I can’t place what’s going on exactly, but the scrambling of audio crew makes it plain that the problem-solving hot potato appears to be theirs.

Much happens very quickly to get the stage left PA stable. From Clocks forwards, my feet remain shaken throughout, which means that we’re back on track. It also means that the problem has been nipped in the bud by the third song. This could easily have turned into a gig-spoiling nightmare, but there are many very experienced and skilled people here who weren’t about to let that happen.

Lets not forget though, that there’s also four very stubborn and determined fellas on stage not about to let that happen either. I remember Jonny telling me about the band’s first Glastonbury show, way back when. They were dropped off at the wrong gate, miles from their stage with only minutes before they were due on.

Many fledgling bands would have accepted defeat, perhaps been a bit gutted, perhaps just taken it away as a story to tell in the pub. Coldplay however, ran the width of the festival site with their guitars, borrowed as much as they could lay hands on from other bands present and did the gig whilst still trying to catch their breath.

There are many stories throughout their history that illustrate this shared personality trait. Problems, setbacks and obstacles seem to fuel them on to succeed out of sheer defiance. If anything, this has got stronger with age. They don’t let up one bit tonight and turn in an astonishingly impassioned performance.

And then finally, we have the sixty thousand Spaniards. They’re jet engine loud throughout, willing the band onwards and chasing away the demons. The decision to film here was down to one thing only – that is, the fact that the crowd are utterly astounding.

FC Barcelona, the world-beating football team that play in this city, have apparently adopted Viva La Vida as their unofficial anthem. This means that many of the crowd here tonight are already well-used to belting out the “woah-oh-woah-oh-oh” from the chorus during matches.

What’s important here is the band and the audience and more even than that, the songs. It’s the shared experience, the communal celebration of this thing that so many people feel the same way about.

It’s been an emotional night, for sure.

In search of dodgy merch