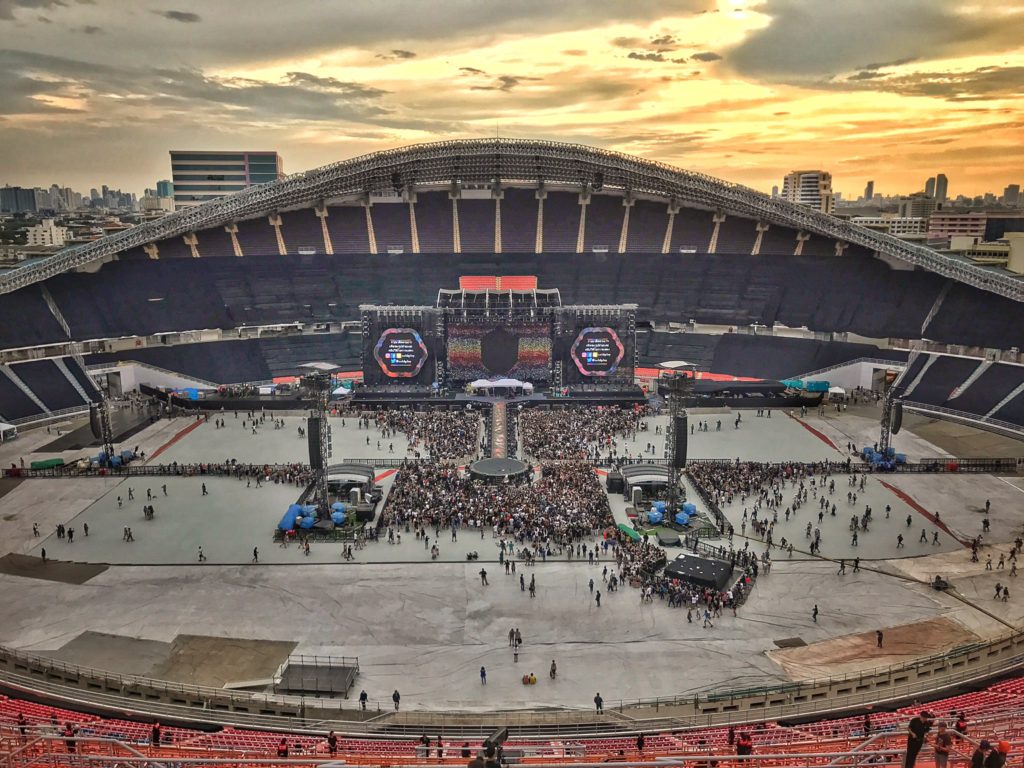 It’s hard to tell whether Bangkok was more humid than Singapore or not, but there’s a good few folks who reckon it’s the hottest show they can remember.

The afternoon leading up to the gig is predictably challenging, with equipment shutting down left right and centre. Even the piano keys are swelling up and sticking. In the roadie underworld, there’s always a few air-conditioning units, but today these too are failing. When the air-conditioning is overheating, you know you’re in Thailand…

Luckily, there’s plenty to make it worthwhile. Firstly, the venue is beautiful. It’s a huge saddle shaped stadium and playing it sideways means the stage is facing a beautiful incline of seating. During the day, coloured seats spell out the name of the venue – and during the evening it makes for the most gorgeous ocean of wristbands. And then there’s the lovely folks wearing those wristbands. It’s not called “The Land Of Smiles” for nothing. When the doors open, excitement bursts into the venue, injecting fresh energy and excitement.

Smiles are injected within the camp when it comes time to sign paperwork outside the Production Office. Needing work permits from time to time is nothing new, but it seems that in Thailand, they prefer everyone to look businesslike and be dressed in office attire. Predictably the results of this on a ragged touring family (regularly referred to by Phil Harvey as ‘the pirate ship’) are wonderfully hilarious.

I spend much of the show outside the venue on a special secret mission, but I’m reliably informed that it was a belter of a show. They were a wondrous crowd by all accounts and the stage itself transformed into a land of smiles for the evening. I also heard shout-outs from Chris to filmmaker Markus Hainey for his birthday and a lovely moment with Hoppy, the band’s longest serving guitar tech, who now looks after Chris exclusively. Hoppy got brought up to the C-Stage for his own round of applause.

Hoppy used to look after the whole band and they travelled all together in one van – the band, all the equipment and the three man crew (himself, first tour manager Jeff Dray and soundman Dan Green).

As we left Manila the other day, folks were taking photos through the terminal window of one of the two huge freight planes carrying all the gear on to this show. I did wonder how that looked to Hoppy after all this time and what the Hoppy in that tiny cramped Sprinter van back in the old days would have thought.