Good grief – here we are at the last show of the leg and I’ve got a bag full of untold stories and observations from along the way.

I must apologise for the radio silence of late. I won’t make excuses – hows about I tell you about right now and then when I get home I’ll start picking through some stuff I missed out along the way?

We’re in Washington DC right now – although for a little while, it did feel as though maybe we wouldn’t be.

We were all set for the trip down to DC from the day off in NYC. We get as far as the fasten seatbelts sign before the pilot comes over the bing-bong to tell us that there are storms in DC and the airport has temporarily stopped all air traffic. Shouldn’t be a problem, but for a half hour, we’ll be going nowhere. Get comfy.

Half an hour turns into slightly longer. The clock ticks onwards from “early afternoon on gig day” to “worryingly closer to showtime” – quite literally with every second. Tour Manager Marguerite swings into “this cannot fuck up” mode. There’s talk of trains, there’s talk of Baltimore – there’s probably talk of a lot else besides, but I decide to keep my head down and stay out of the way. Too many cooks and all that.

Eventually, the storm clears (both literally and metaphorically) and we’re taxiing towards a non-cancelled show. Near-misses it seems, don’t only occur in the air…

Arriving late means that the first DC show day is a complete blur for me. Wolf Gang are well underway by the time we get in, meaning we’re straight into show-prep and done before you know it.

Two shows in one city always means the chance for a bit of mischief after the first show. For the band party, there is no runner as we’re staying in the city. For the crew party, there is no load-out after the show and even better, no load-in the following morning. All of this makes it seem rude not to get together and write off the following morning. And so it is in DC. Mags has organised an end of tour-leg party for all. I’m not a big one for hanging out in noisy rooms after noisy pop concerts, but this is a gathering of the tour family and as such pretty much unmissable.

This is probably the happiest and warmest touring family I can ever remember being part of, so the opportunity to all hang out in a room together with our hair let well down is truly wonderful. I’m starting to realise how much I’m going to miss this tour (or more importantly my friends on it) when it’s over, so I’m trying to force myself from hotel-room hermitage and out to enjoy as much of it as I can while we’re still out here.

As is the nature of these things, my memories are somewhat blurry of the evening – and it’s probably best for all concerned that photographic evidence is minimal. I do remember the 3am champagne toast, complete with squalls of feedback from the karaoke mic (prompting inevitable screams for the audio department to get a grip). I remember Robyn and her folks turning up moments after the DJ had played her track Dancing On My Own and her proceeding to commandeer the decks for a DJ set of her own. 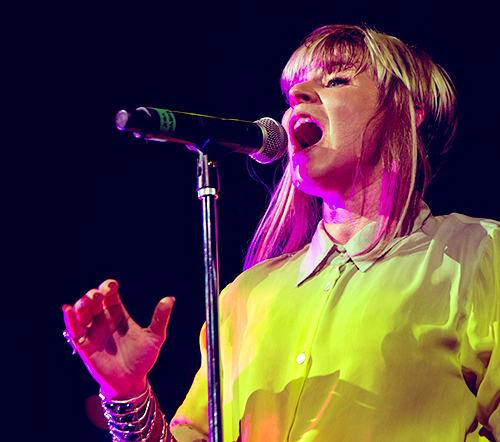 (And I may be mistaken, but I swear I remember the same song of hers being put on later by the resident DJ, prompting the wonderfully bizarre sight of her dancing on the bar while the video version of herself sang the tune on the screens behind her.)

Unsurprisingly, the following morning doesn’t start until the following afternoon. Most conversations in the venue begin with “what time did you leave?”

I’m in the midst of one of these conversations in catering when through the walls comes an explosion of punk rock mayhem. This can mean only one thing.

For many years, there has been a “crew band” comprised mainly of the backline department, but filled out by anyone who fancies getting involved. Robyn’s tour manager it seems, is none other than Ali McMordie, from seminal punk heroes Stiff Little Fingers. He’s taken the bass spot on the stage and I arrive on the arena floor just as they finish a rousing cover of Anarchy In The UK (complete with Nicole from production and Tiff from wardrobe dancing up a storm).

It’s too good for just one tune and they plough through another as I reach for the camera. No better way to blow away the morning after cobwebs!

Like a Halley’s Comet sighting, it came from nowhere and disappears every bit as fast. When they’ll grace the Coldplay stage again, I have no idea, but in the meantime, I give you the July 2012 incarnation of Oldlay. Contact Steve Strange at X-Ray for booking details… 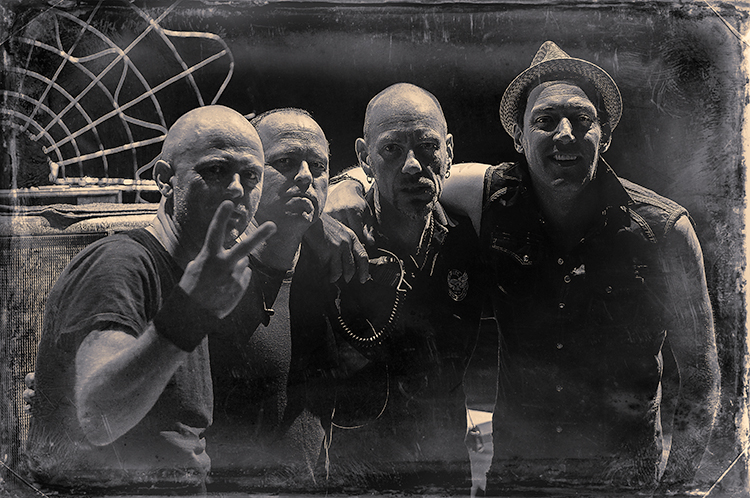 On the subject of folks getting up and doing their own thing, I should mention how many great outfits folks have been wearing to the shows on this tour. The whole graffiti theme of the record screams of self-expression and creativity, so seeing folks arriving in their own Mylo outfits is a superb strengthening of all of that.

Trainer Dan pointed this guy out to me before one of the recent shows – apparently he has been to a bunch of Coldplay shows and even kept the butterflies from a Viva show he saw a couple years ago to make the hat he wore this time around – good work! 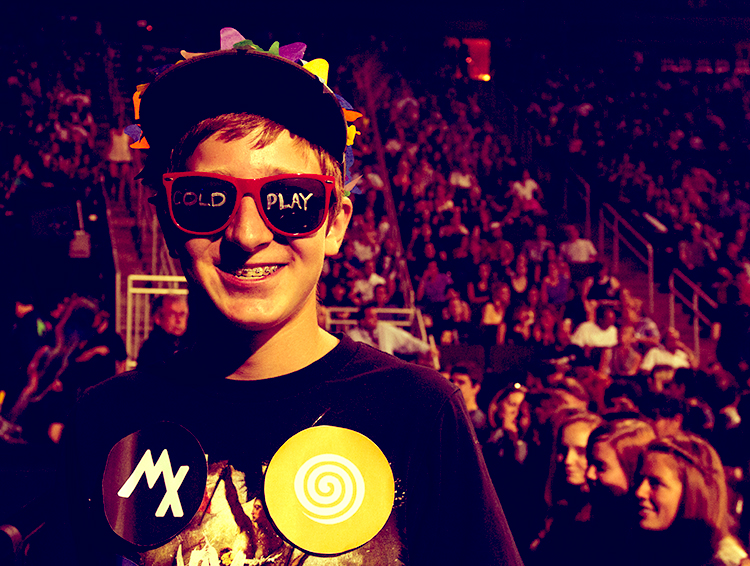 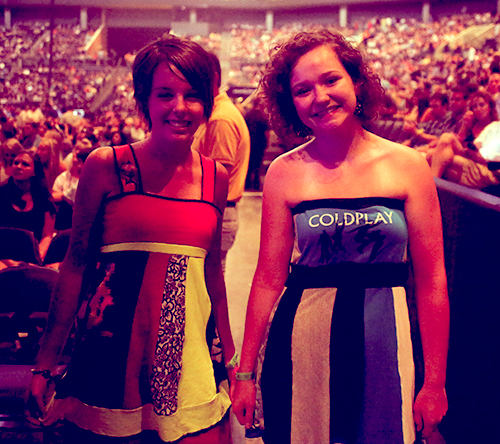 All this talk of unusual attire would, of course, be incomplete without this crew contribution from that most happy-go-lucky of lampies, Phil Sharpe. 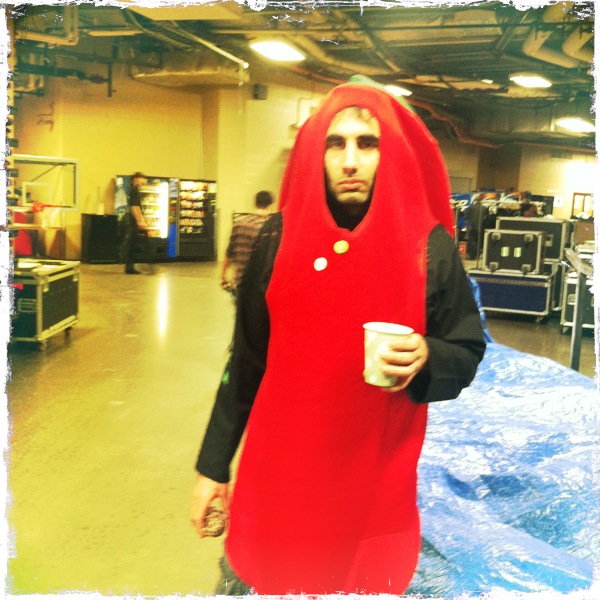 I *think* this may have had something to do with Oxfam, but as ever, it feels more fun not knowing.

So that’s the crew and the fans – what of the band? Well, it’s been a family-tastic tour, with the band enjoying a lot of time with loved ones, whilst in some of the more lovely parts of the USA. This always results in huge smiling faces and fully enthused shows. 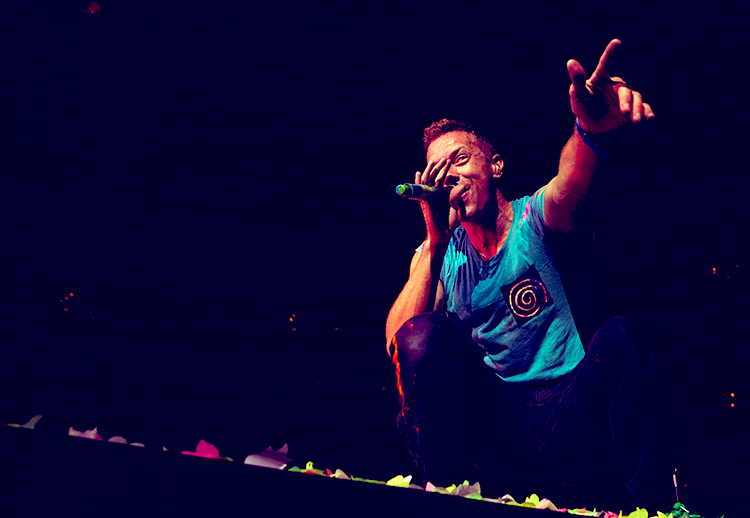 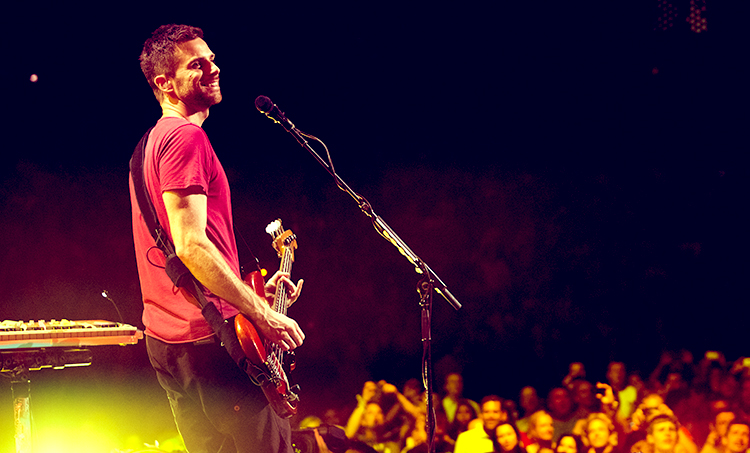 They’re hugely on form and they’re enjoying every minute of it, it would seem. Perhaps they too realise how wonderful what’s going on here is. Whatever the reason, the shows have been belters. 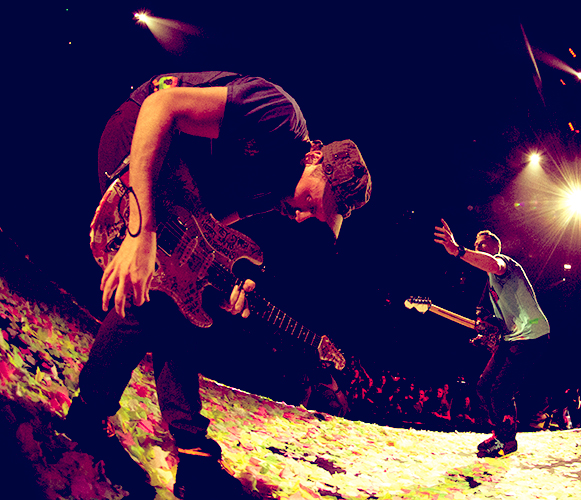 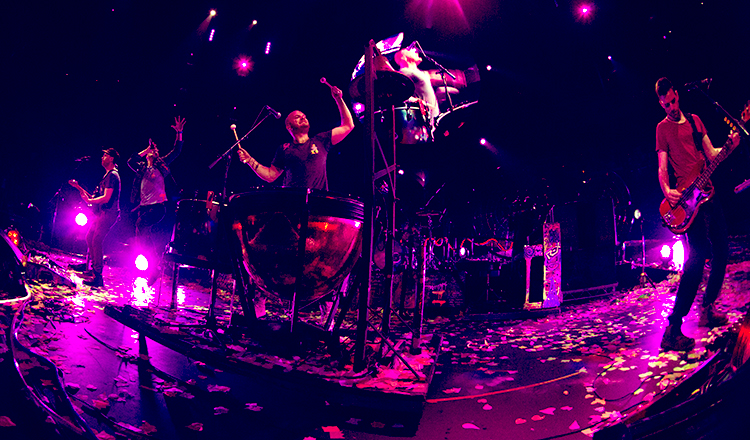 I’ve been on the road for over twenty years and I can recall plenty of that time that’s been a struggle. What’s going on here, though, is very special and supremely enjoyable. These are friendships that will endure until all of this is just a “do you remember when?”. 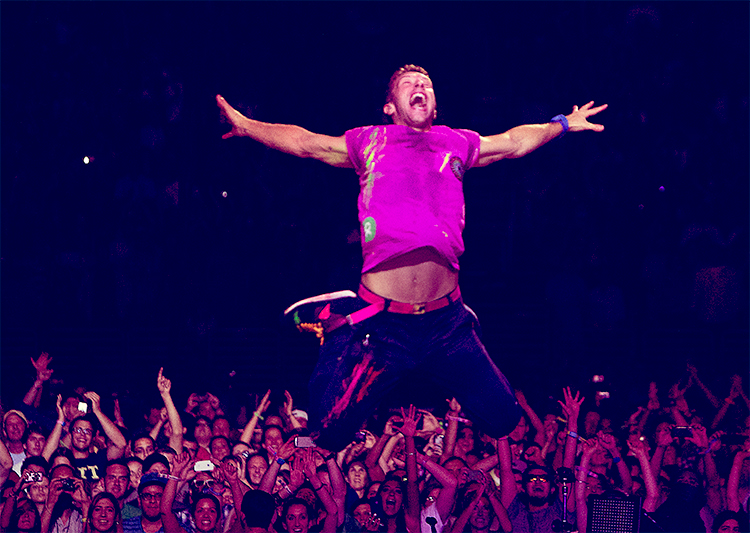 I’ll remember this for the rest of my life – and for that, I feel very fortunate.