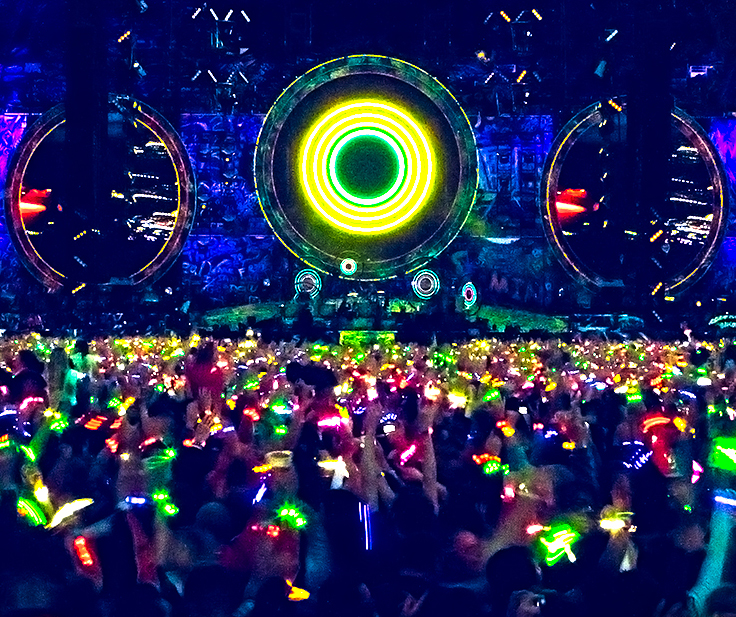 In a lot of ways, hometown shows can be like a family Christmas. They’re ostensibly a time of joy and celebration. You do tend to forget though, how much stress comes along with it – and you pretty much always collapse in a heap at the end, glad that it’s all over for a year or so.

London, of course, is just another gig – the same as any other. Every gig has to go well and every gig is important. Nevertheless, you can feel the crew collectively clench their teeth (and other parts) as the hometown shows approach.

It’s glorious being able to drive (or in some lucky cases walk) home from a show. Having friends and family visiting is also a joy. It’s a rare and slightly surreal sight, as the worlds of work and home collide. Usually they’re so driven apart by touring and here they are mingling happily. As crew-folks shepherd their loved ones around the stage for a look before the show, suddenly their families become part of ours. And as we’re introduced by name and job description, we briefly become part of theirs.

This of course, brings with it its very own pressure. Nobody wants to bugger things up in front of their mates – or worse still, their mum. It’s tough to ignore too, the fact that all the major UK press is in London. Clearly, not fucking this up would be good.

All of these extra visitors means virtual guest-list-meltdown up in the production office. It’s Nicole, our wonderful production assistant, who stands amidst this torrential downpour of requests. (“Can I get my neighbour plus one?”,  “The guy from the company that delivers lightbulbs to the studio has asked for his daughter plus two”… and so it goes on). If this is the family Christmas dinner, she’s undoubtedly juggling place settings for the biggest table ever assembled.

Perhaps Nicole’s ability to remain so irrepressibly cheery amongst all this, may well have something to do with it being her birthday on show 2. Alongside hundreds of guest tickets and passes, her desk is dotted with cakes, balloons, cupcakes and cards – including the communal card signed by all. The card-signing is undoubtedly “won” though, by Arlene from management, who ends her greeting: “Lots of love from Arlene Moon (+3)”.

The shows aren’t without their moments of panic crew-side. Nothing major, but enough gremlin-chasing to keep everyone well on their toes. Every night feels like a triumph as the after-show drinks see round after round of everyone’s nearest and dearest telling them, “No, I mean it, it really, really *was* amazing”.

I can’t disagree. The stadiums haven’t just been the most “Mylo” presentation of the live show so far, they’ve been by far and away the best stadium shows the band have ever done. Perhaps even the first genuinely superb stadium shows of the band’s career.

They’ve been doing stadiums since back on X&Y. I felt like Viva was the tour where the band themselves got comfortable enough to fill the space – and to perhaps even enjoy the size and scale of the event. This time round though, every single piece seems to have fallen into place. The confetti, the pyro, the lasers, the inflatables, Andy Bramley’s spectacular screens footage. Misty and Paul’s remarkable stage design and Graham’s glorious lighting. Paris has graffiti’d the whole place to within an inch of its life. Last but by no means least, there’s Jason’s wristbands that turn the whole audience into the highlight of the show – and the gigs themselves into something truly unique and groundbreaking.

We’ve broken ground too, in doing outdoor shows wholly without a roof. I’m sure folks have done it before, but we certainly haven’t. I show a friend of mine around the stage after the first night in London. He’s been in the production industry for longer than many of the audience have been alive. “What on earth are you thinking?” he questions incredulously. “What happens when it pisses down?” I shrug: “The band get wet and shit breaks”. Well it’s got us this far…

The damp has certainly been a great opportunity to discover pretty much every new and exciting way you never knew your gear could fail. But spending the afternoons working out what’s happened and what needs to happen to make it right, brings truth to the cliche of the touring crew being a family unto themselves. Everyone makes fun at each other’s expense without mercy – it’s almost a sport. Once there’s a problem though, everyone gathers around to pitch in and get things sorted without so much as a missed beat.

The sight of more than two people staring frowningly at a piece of equipment is enough to gather the tribe. Suddenly the brain trust is brought to bear and what was unsolvable gets chipped away at until all is once again well with the world and full strength is regained.

So, that’s the hometown festivities dealt with for a while again. Top time all round.

Interview: Marina and the Diamonds