Hello Pilar, how are you?
I’m really good, thank you.

How did you originally get involved with creating the AHFOD artwork?
It’s a really crazy story. I moved to LA quite recently, and I started working for this new agency, MAAVVEN, that represents a few artists. And for their launch, they sent these email blasts every week with just one GIF image from a different artist. And when they sent the one that I did, it somehow got to Phil Harvey and he was like, “Oh my God, this would be great for the album artwork!”.

So he got in touch?
Yes, I think he replied and they gave him my website address. Phil looked at the site and I guess Chris also saw it and they were like, “Let’s just meet her”. So we met for lunch.

When was that?
It was about a year ago. We had a great meeting. All the ideas that they were thinking about for the new album were really in line with the kind of artwork that I do. So we were like, yeah let’s just get started. It was pretty crazy.

You said you moved to LA recently – where are you from originally?
I was born and grew up in Buenos Aires in Argentina. I left my country when I was 19, then I was living for a little bit in Germany.

And you’re an artist and graphic designer?
Yes. I mean, I didn’t go to school for graphic design, I was self taught. I was kind of like a nerd with computers when I was in high school, so I really started by doing Photoshop and illustrator, but I also loved doing artwork. I did a lot of collages when I was in my younger years. So when I finished high school I started getting small jobs, doing graphic design and then slowly I knew how to do it myself. 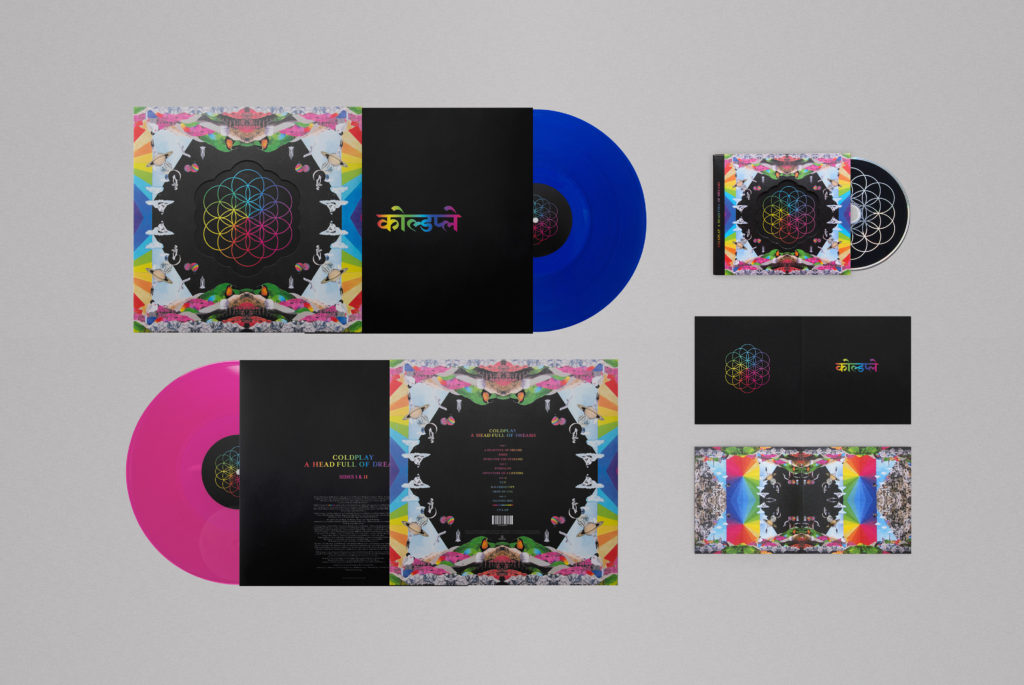 How familiar were you with Coldplay’s work before?
I did listen to a lot of Coldplay when I was in my early ages. I had their CDs.

Have you ever seen them live?
No, never. I can’t wait for that.

It’s amazing that when you do, your artwork will be right there behind them!
Oh my God, yeah. That’s like a dream come true.

So after you met Chris and Phil for lunch, what happened next?
From when we had the first ideas to what we have now was a long road. It’s crazy how everything unfolds. So we had a few meetings and, of course, there were some concepts and some ideas. They wanted something very colourful. And they really like geometry and Chris was talking about the fibonacci spiral, which is the spiral shape the shell from the ocean has. So we were talking back and forth all these ideas and we met multiple times and had these brainstorming sessions.

Had you worked on album artwork before?
Yeah, I did. But always for small artists. Like underground electronic music.

And this was a very different process?
Yes. This is my first really big job.

So how did you actually get started on creating the AHFOD artwork?
The band was recording in London and they wanted to make a little art studio. They said they wanted to do a big collaborative piece and I thought, well let’s do a big collage! I said we should get some pictures of when they were kids and whatever brings you memories or dreams. So we met in London and we had all this awesome material, like old magazines, pictures and all different kinds of stuff. And there was this big canvas – it was three metres by one and a half metres – and we had all this material to use. I was like, “Woah! Where to start?!” 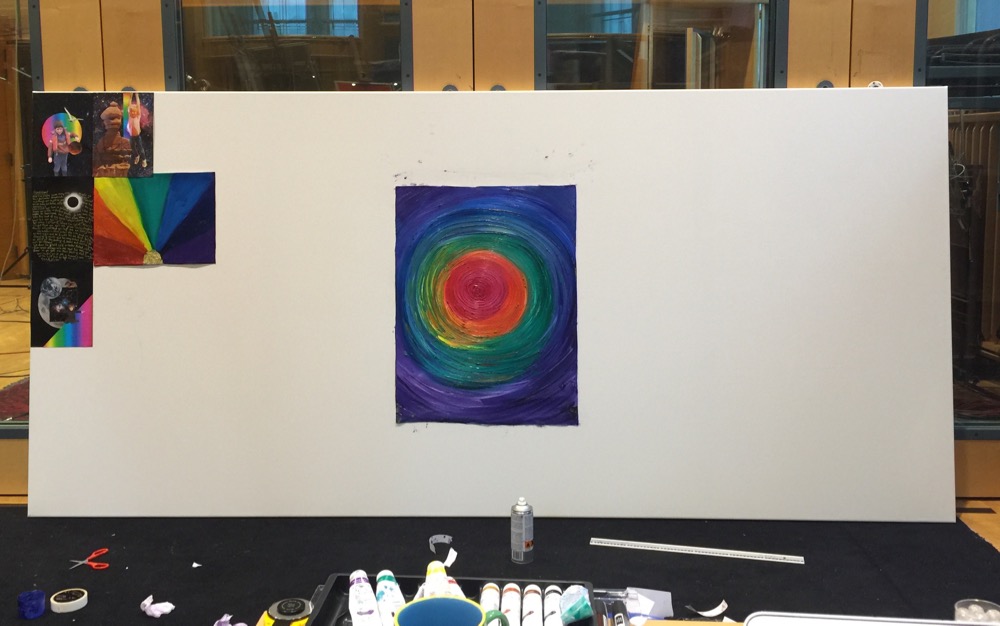 What sort of things did they do?
Well, for example, Guy had this huge box with really awesome old photos that he was cutting out. And Chris would come and he would do a painting and then we’d try to include it in the collage, or he would come and paint a bit of the collage. So it was like a mix of things. And then all of a sudden a week later we have this huge collage done. And I was like “how did this happen?”, because I really didn’t plan it. I didn’t do a mock-up of how the collage would look. It was just organic.

Did anyone else work on it?
Actually, the band’s kids came and they did all these beautiful paintings, so I wanted to include those too. So if you see the mountains of the collage at the top, the layers, it’s pieces of their kids paintings that I scanned in. So it’s like a mix of everything. And at the end it looked really good.

And the collage was created for the album cover?
Well, we were really just doing it for fun. We didn’t have intentions to do this piece as the album cover. It was just potentially to be inside of the album. But then everybody was saying a part of it should be the album cover. I was like, how am I gonna make an album cover from this?!

I remember seeing it in the studio and thinking it was enormous.
I know! It was very big. And a lot of my work is very minimal, so I’m like how am I gonna include this huge collage in an awesome album cover?! But there was still the idea of having something geometric and we had this image, the Flower of Life. Chris really liked it because it’s a pattern that’s in nature, and it has a really powerful meaning.

What did you do?
Me and Chris met again in New York with all the material. He wanted to see everything. And he said,

Why don’t we try to make the collage like a kaleidoscope?

So when I multiplied the collage and created this kaleidoscope, we tried cropping it to a flower shape and somehow that’s when everything came together. Then they were like, “What can we put in the middle? Right, the Flower of Life!”. And it fitted perfectly.

When we first posted the finished artwork, it was amazing how quickly the fans realised that the child pictures are of the band.
No way! Really?

Absolutely. How did you pick which photos to use?
They just brought in some really fun pictures of themselves, a couple each. I didn’t want to use them all, in case I wanted to use them for other things. It felt like it was fun to create this little world. At the end the whole thing made sense. So Phil is sitting on a cloud looking out for everyone. Chris was on top of the moon and Jonny was jumping from Saturn’s rings. And then Guy is holding his little brother and Will is jumping into a swimming pool. I didn’t really plan it out, I was just trying them in different places.

Is there meaning in every aspect of the album cover? For instance, should we read something into the presence of a toucan?
I feel it was more like intuition of working all together. The more I was in the studio and hearing a little bit of music, we were creating this vibe. And I feel like the artwork is a manifestation of all that process. One of the tracks had lyrics about birds and you can hear the birds in that song. So I feel like everything is there because it just somehow happened when we were working.

And then in the booklet you can see even more photos.
Yeah. Those are Guy’s old photos. He brought in this suitcase full of them. I was gone for one day and when I came back to the art studio there was this huge collage. It was amazing!

How did you find the band to work with as people?
The guys are amazing. They’re so fun to work with. It was an awesome experience. It was a lot of exchange. The whole process was really inspiring.

Were you nervous about working with them?
Yeah. I was really nervous before coming to the studio. Because the first times that we met it was just Phil and Chris, but I had never really experienced working with the whole band. And then I went into the studio, with all these amazing talented people, with no idea what I was gonna do. But everybody made me feel so comfortable. And the whole artwork was a product of this amazing inspiration that everybody was involved. I am really, really happy with the results.

Coldplay have always had really strong artwork, so the bar was set high for you.
I know, that was the thing! I was like, “Oh my God, how am I gonna make something awesome?”. I was trying to think of all these possibilities. But then it just happened.

And how has it felt having it out in the world? Millions of people have seen this artwork now.
It feels amazing. I’m so happy. It’s like a dream come true to be honest. It’s hard to accept it. I’m like, “Did I really do this?”

How have your family reacted?
My parents were so happy and so proud. My mum is a big Coldplay fan.

And now there are billboards of the artwork up all over the world.
I know! My friend just sent me a photo of the poster in Buenos Aires. It’s so amazing to see all the different variations of it. It’s crazy cos it’s everywhere. I can’t believe it.

Have you finished the artwork for the singles?
Yes, I’m almost done with them. I want to create this universe of dreams and kids and being happy. So it’ll be around those lines. And hopefully we’ll use more pictures from when they were kids. I have really good ones, so I hope!

What about the painted lyrics in the cover, did Chris do those himself?
Yeah. The whole idea was using a lot of colour and Chris found these pencils that when you write they have the colour spectrum. So we thought we’d try to use them on the lyrics. It created this beautiful colour pattern. I think the fans will actually look at it for minutes and try to figure out what it says. That’s the beauty of handwriting and using different materials.

And what are you working on next?
I don’t know to be honest. This whole project came as such a surprise that I’m just open to the universe to see what’s coming after. But so far I’m really excited to continue working and we have a lot of things to move on to with this project.

And finally, what is your favourite Coldplay song?
This might be the obvious answer but my favourite song is The Scientist! It reminds me when I was living in Argentina and going through my teenage years.

Thanks to Pilar for chatting to us. For more information on her work, head to pilarzeta.com