Interview: Chris – “We’re having the time of our lives”

Coldplay.com catches up with Chris in Atlanta during the Viva tour 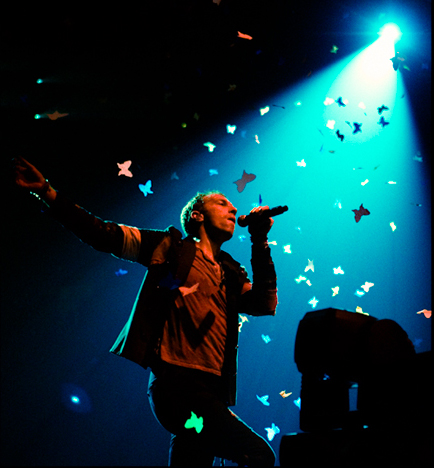 Hello Chris, how are you?
I’m good man, I’m in Atlanta. I just had my ears looked at and my mouth washed out.

What’s wrong with your ears and your mouth?
Well nothing as it transpires. But in every city I go to, I like to find some random person on the street and ask them to look at my ears.

To what end?
I like to ask what they think about 31-year-old men getting their ears pierced. But it’s almost unanimous agreement that it’s too late, you can’t do it. It’s annoying.

Right. Let’s talk about the Prospekt’s March EP. Had you always planned to release it?
Yeah, the idea was always to put these songs out about now.

So when you started recording Viva La Vida, the intention was to have extra songs?
Yeah. But they’re all part of the same family. In truth, I think because Glass Of Water’s a little heavier, for example, we felt like, “Let’s put the album out and then if it does OK we’ll put out those songs that we were maybe a little shy about putting out”.

Did any of the EP’s songs come close to being on Viva La Vida?
Well they all kind of are. I’ve never thought of them as not being, y’know? That’s why it’s funny when I realise people haven’t heard them yet. Plus, it was nice to have an opportunity to remix Lovers In Japan and get Jay’s version of Lost! on there. So to me it’s like the right hand to Viva La Vida’s left hand.

Are you pleased with Jay-Z’s Lost! rap?
Yeah, I love it. He’s a clever man.

Did you hear the mash-up album of Coldplay and Jay-Z songs?
Viva La Hova? I haven’t heard it, but I’ve heard about it. I don’t look at anything on the internet very much, so I don’t really know what’s going on.

And what was the thinking behind the new Lovers In Japan mix?
Well, we’ve been playing it live better than it is on the record. So the live version has informed this Osaka Sun version, which is just a bit more lively. I’m super-pleased with the EP, I’ve gotta say. And I’m allowed to say that because it doesn’t have the same pressure as an album coming out. I think the people who’ve got Viva La Vida already and like it will hopefully really like the EP because it’s from the same family, if a little more catchy. And the people who haven’t got Viva La Vida can get both together. I just feel good about it. But what I’m really excited about is playing in Britain.

Ah yes, the UK tour is only a couple of weeks away.
Exactly. I realised onstage yesterday that we’ve done almost 70 concerts now and we still haven’t played at home. I just felt like, “Man, we’ve been really rude, we’ve got to go back and play there”. I can’t wait for the Sheffield show.

Do you have any special plans for the UK tour?
We’ll we be doing the same kind of things, but the jokes will be more Britain-centric. We’re going to have to lose all the Joe the Plumber jokes and the Sarah Palin jokes and come up with ones about Jonathan Ross and Russell Brand. Really the only problem with playing in different countries is thinking about what to say between songs.

You’re playing in the UK right up to Christmas, with the last show on December 23rd in Belfast.
Yeah. And I would also like to do something on Christmas Eve, but I’m not sure if it’s possible. I have to say, it does feel weird that we haven’t been in Britain at all. Over the last week or so, the realisation of that has really hit. But I think next year we’ll make up for it.

Is that a hint towards future plans?
Well, we tried to get Knebworth but it just wasn’t possible. So we’re having to think of something else. In fact, I think we have thought of something else. Hopefully we’ll be able to announce it soon. And hopefully it’s not the same day that Oasis have booked it.

Although that would be a good double bill.
It would be a great double bill. And we wouldn’t mind opening. I would also, funnily enough, open for Take That. We were in the dressing room yesterday and, for whatever reason, we started singing Back For Good. We sang the whole thing, word for word, with all the right chords on our piano, without having to learn it or anything. It was great. So I’d like to use this forum, the Coldplay website, to announce that if Take That want us to open for them, we’ll do it. The only problem is that we’ll have to get down the gym for a bit.

But you do have more touring plans for next year?
Yeah. Our touring plans are very much like Christmas presents that are wrapped, but you can basically see what they are. If you look carefully you can see the shape. And you can probably guess, “Oh this feels like a stadium”.

Have you been enjoying this tour?
Man, we’re having the time of our lives. The truth of it is, we’ve always wanted to be a band that could go anywhere in the world and it’s suddenly happened. It’s such a privilege. It’s surreally brilliant. But we can’t wait to get back to Britain. That’s home. So, what else is going on in Britain? How are Tottenham doing?

Well Exeter are in the fourth tier of English football and they were beaten by a team from the eighth tier.
What?!

They’re called Curzon Ashton.
Hang on, you’re telling me they got beaten by Demi Moore’s husband?!

It’s quite fashionable to buy a football club these days. Perhaps you could make Exeter an offer.
Well, if we had enough money I would love to buy Exeter City and then give it to someone who knew what they were doing, because I don’t really know anything about football. But it’s too expensive. Funnily enough, someone came up to me in New York the other day – a big businessman – and said, “I nearly bought your band the other day”. I can’t tell you who it was, but it was a hilarious conversation. He said he’d nearly bought our label.

So, if you had to pick the best gig from this tour, which would it be?
Paris Bercy.

What was good about that?
The crowd. And the price of the refreshments. I judge our concerts on how reasonably-priced the veggie burgers are. If I see that they’re too expensive, I can’t have a good gig.

Really?
No, not really.

Good. Because the price of a burger is often linked to its quality. Cheap burger usually means bad burger and vice versa.
Do you think so? Does that work with music too? Could we be like Be Here Now, reassuringly expensive? By the way, could I go on record and state that Be Here Now is a great album?

Not even Noel Gallagher thinks that.
No, Noel doesn’t like it, but I do. I think it’s got great songs on it. I think My Big Mouth is one of Oasis’s best songs.

But that album is just too long.
Well that’s also known as X&Y syndrome. Every band gets it. But for anyone reading this, they should listen to the song My Big Mouth by Oasis, because it’s wonderful.

It was nice to read your note about Barack Obama winning the election last week.
Oh man. This American tour has been fantastic because it’s just such an incredible time to be here and the audiences are in such a good mood; I think our audience is probably 90% Barack people. It’s been like living in the middle of history. We were in New York on election day and it was a total carnival.

It sounds amazing.
It is amazing. You remember when Take That came back? It feels like that for America.

That good, eh?
Yeah. If you think of America as an Othello piece, it feels like it just turned over. It feels like 50% different. It feels like all the people who’ve had to be quiet for eight years are suddenly the people that are now gonna get to make decisions.

Have you been writing songs on tour?
Yes. I write all the time, because it’s the only way to make sense of everything. I’ve got one of those little keyboards you get given for Christmas when you’re seven. I have it with me at all times.

Can we have a sneak preview?
Um, well, it’s about when your uncles get drunk and sing.

Is it really?
Yeah, I promise. And it also owes a slight debt to Altogether Now by The Farm. I never knew that song was about the football match in the trenches in the First World War. It’s amazing.

Well we’ll look forward to the drunk uncles song. In the meantime, is there anything else you’d like to add?
Just that we are grateful to the people that have been into our band this year, because we’re having an incredible time. In fact, we fucking love it. And we’re gonna get better and better. That’s the news.