There’s an urban myth that a frog can’t discern tiny changes in temperature – meaning that you can plop it in a pan of cold water and if you turn the heat up slowly enough it won’t realise it’s being boiled alive.

Now, this is apparently untrue and obviously I don’t condone any kind of animal cruelty, but as an analogy, it’s quite apt. For most of the touring party, it feels like the final applause of the Glastonbury show marked the point at which the pan came off the hob and we were returned to our natural habitat. It’s not like we didn’t know there was stress in the air, just that most of us hadn’t realised quite how far from comfortable we’d travelled, as everything just kept ratcheting up a tiny bit at a time.

I can’t even begin to imagine how it’s been for the band. On top of all that we’ve been dealing with, they’ve been finishing a record, mixing, sorting out track-listing, photos, videos, promo, last minute extra songs – all of this on top, plus the ever present knowledge that they’re big enough now that there’s plenty of cynical snipers who’d love to see them fail just – well, just *because*.

Standing around nursing a beer after the Glastonbury show, someone asks me “so, do you get some time off now?”. “Oh yes” I reply. “Nothing now for at least…..” (Swig) “two days”. A month of total collapse would have been nice, but that’s not really how things work. Despite the schedule though, the relief of a major milestone passed is enough to see everyone in very good form as we head off for Gothenburg.

The Gothenburg show itself is hugely relaxed. It’s a compact festival in a lovely wooded spot. The smaller crowd after Glastonbury makes it feel a little like doing a show in someone’s back garden (although, in some ways, that’s exactly how Glastonbury could be described).

The one standout memory of the Gothenberg show for me was the look of joy on Guy’s face throughout. I’m pretty sure I haven’t seen him look so much like he’s enjoying himself so much on stage for a long time. Funny, he never looks stressed….

Then, on to Poland. Somehow, Coldplay have never made a visit here before. Whether it’s that, or just the general up-for-it nature of the crowd I’m not sure, but it was a very raucous show out front. There were some pretty unpleasant looking crowd surges before the show proper started. It’s never nice seeing people looking uncomfortable, or even frightened when you look out from the stage. I’ve definitely never seen as many people passed over the barrier in one Coldplay set as that night.

Having said all of that, once the show settled in, they were a gloriously bonkers bunch. Completely unexpected, as well. Generally, you know that when you get to Scotland, Italy or South America, they’re going to blow you away, but I genuinely don’t think anyone had any expectations at all here. Turning up and find such a massively enthusiastic audience is a real bonus. They’re noisy for every song, greeting even the new stuff like old favourites. Chris himself asks partway through the show “Why did we wait so long to come here?”. I have to agree. 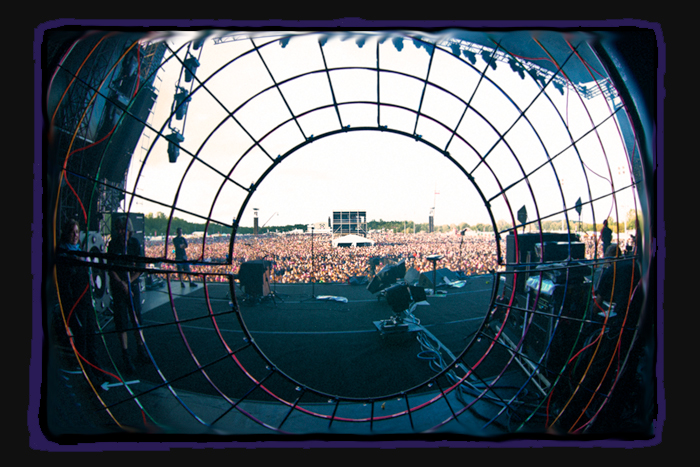 The Werchter festival is one we’ve done more than once before. Belgium, it must be said, is a pretty tiny country. This makes the size of the festival crowd here all the more striking. 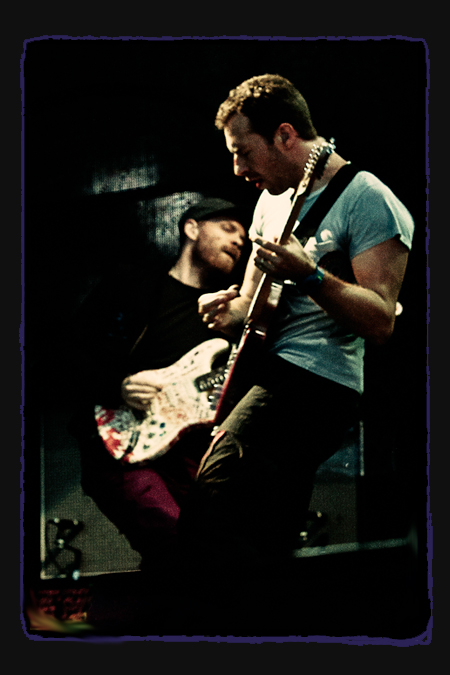 The lineup too, is mighty impressive. Not only are Elbow gracefully floating through the air as arrive, but there is also PJ Harvey and Portishead on the main stage today. Now PJ Harvey, I worked for very briefly just before Coldplay, but Portishead I’ve never seen live before at all.

I wander up to the side of the stage to watch some of Polly’s set and I’m flanked by half of Elbow and a good showing from Portishead. It’s a total Brit invasion and it seems, a complete mutual fanclub.

My only memory of the show itself was feeling rather uncomfortable feeling at hearing onstage soundman Chris Wood explaining that he was having to constantly reset his digital mixing desk. Amongst words you don’t really want to hear in your in-ear monitors just as the intro tape rolls, I’d rate quite highly Chris Wood saying “Get the screwdrivers out Connor”. 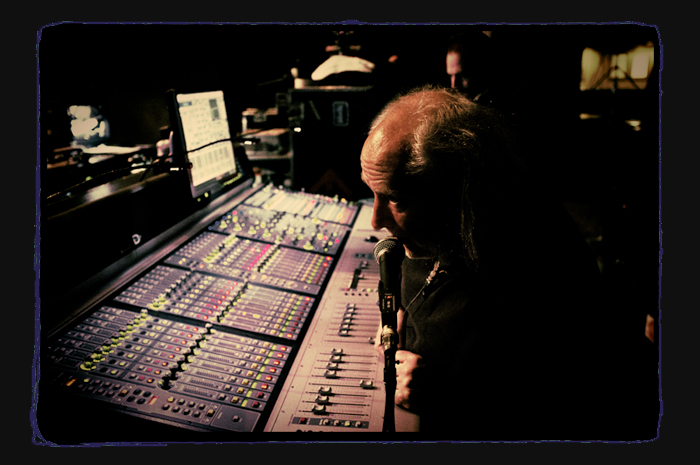 We make it through with only minimal disruption, but I can’t help thinking how fortunate we are that this wasn’t going on amidst the tightly-wound Glastonbury changeover.

I hitch a ride from Werchter to Arras on one of the crew buses. The shows are back to back, so it gives me a chance to be on site early the next day to do a bunch of tidying up in my rig that’s been somewhat overdue since first rehearsals.

It starts to dawn on me though, that the crew are still hammering a pretty fierce schedule. Back to back festivals means finishing load out at 2 or 3 in the morning, then getting all the toys back out again a few hours later at 6 or 7am to be set up and fully checked before the festival opens to the punters.

This means that most of the crew are pretty much frazzled to a crisp by now. Sleep has to be grabbed more than once a day in short bursts whenever the opportunity arises. I note that following Arras there’s a bus journey of 25 hours to get to Portugal. I predict some pretty broken folks staggering off the crew bus in London at the end of this leg…

The Arras gig is set in a square, amongst some gorgeous, slightly worn old French architecture – very French revolution and VIVA… You also know you’re in France when you overhear someone in catering enthuse “check out the fresh fruit bar – it’s behind the baguette stand”. 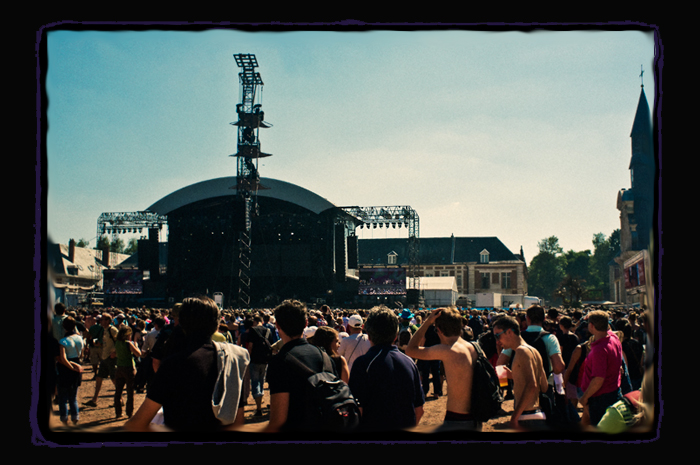 The gig itself comes with its own share of gremlins. In My Place gets derailed when Will throws himself so enthusiastically into it that his in-ear monitors become completely unplugged. The orchestra parts go off in one direction, as he bravely struggles to get things back on track, unknowingly taking a slightly different route…

There’s all manner of other little brain-farts and fuck-ups along the way, making it an unexpected struggle to get through the set. As ever, the crowd carry them through and the band’s complete unwillingness to let things go south prevails. I was expecting a somewhat subdued and emotionally dark flight home, but the band are in high spirits, having wrestled the show into submission and come out resolutely on top

Maybe we’re not quite off the stove just yet…

Glastonbury and the ETIAW video