Glastonbury and the ETIAW video

When I went away to university, slightly more moons ago than I care to admit here, I promised family and friends that I’d write regularly. Most of the letters that I actually sent, began with “Sorry I haven’t written for a while, but I’ve been dead busy”. If you’d told me then, that there would be weeks in my future like the couple I’ve just had, my 18-year-old self would have had to concede that, really, he’d just been drinking a lot and not getting up ’til the afternoon. (Thinking back though, that was probably better grounding for touring life than a thorough understanding of convolution theory. But I digress…)

Since Pinkpop then, there’s been more work on nailing down the record, a video shoot, a bunch of very intense rehearsals, a tiny gig to nobody in an empty theatre – oh and an absolutely storming set at the mother of all festivals. Now we’re all back together heading off to another festival somewhere in Europe it all feels a little like it never really happened. The weary bodies and far-away looks though, mean that we haven’t quite shaken the feeling that we’ve crammed at least a couple months into the last dozen days. 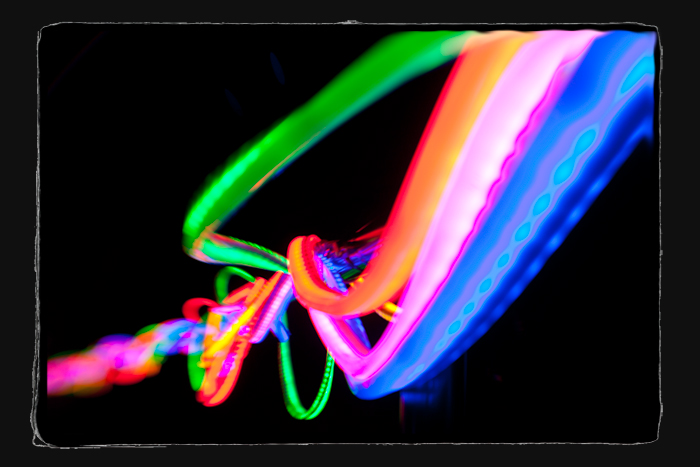 Video shoots are always a strange proposition. Gig days bring with them an urgency and a definite set of times when the show must go on – ready or not. Videos, being a more permanent and lasting piece or art than a 90 minute show, involve a lot more painstaking “we’re not quite ready yet” in the pursuit of the perfect result. 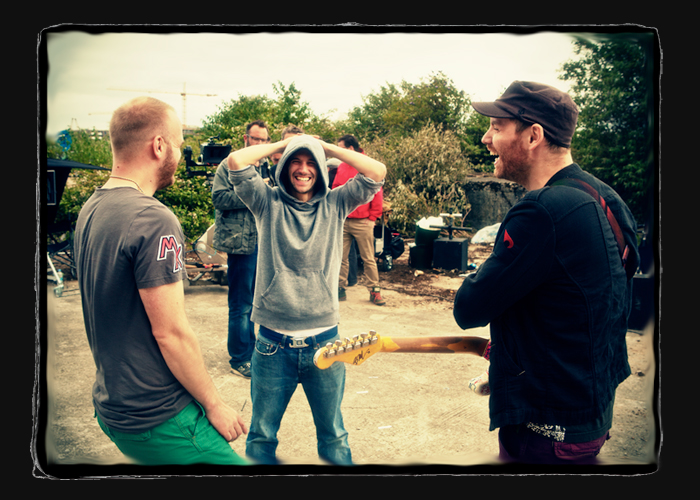 Added to the normal video-shoot treacle, was the fact that the video in question was being shot using a technique called stop motion animation. For the first day, it has to be said, there was a great deal more stop than motion – and generally, the animation came only when the tea trolley made an appearance… As you can all see for yourselves though, Mat Whitecross and his army of collaborators pulled something truly wonderful out of the bag. 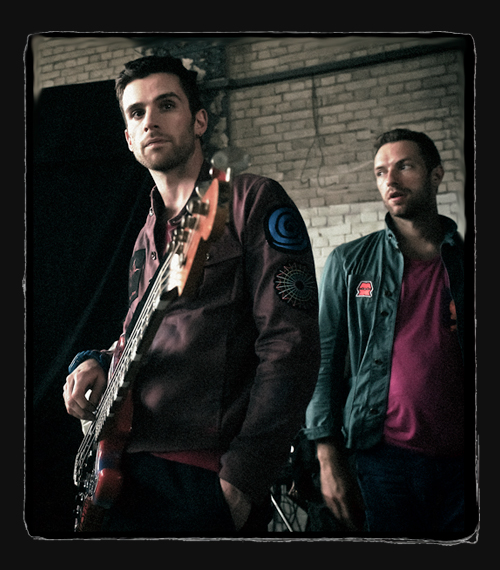 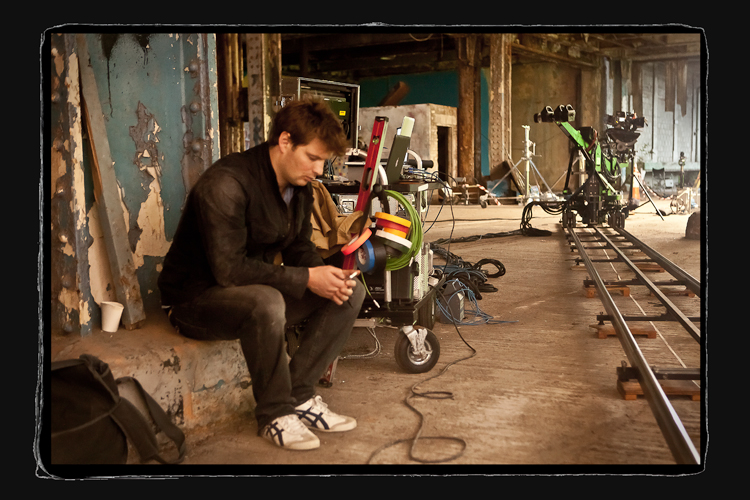 Always lovely as well to see Paris, the band’s Graffiti artist in residence. Paris is both extremely talented and genuinely one of the most lovely people I’ve met along the way. I’m hoping we see a lot more of him over the next year or so. 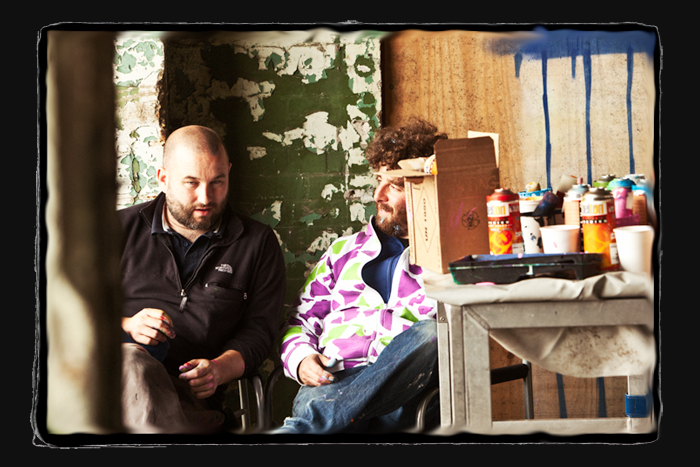 Also, we had to get ready for Glasto. To say that the band were keen for things to go well might be understating things a touch. Glastonbury, as I’ve discussed before, is no place to phone it in. Rehearsals passed in a blur of trying out different ways of doing things and a hundred tiny alterations to the set. Finally, in order to give our tweaked up machine a proper street test, there was a show booked at the Shepherd’s Bush Empire.

There had been talk of making it another “Friends and Family” show, like the Forum, but as it turned out, it was just going to be one last closed rehearsal, complete with smoke, lights and a resolute promise that once the intro tape ran, they wouldn’t stop until the last song was done – no matter what. So there they were, in a tiny empty theatre in west London – preparing for possibly the hugest show of their careers by playing to a few roadies and Phil Harvey up in the balcony. 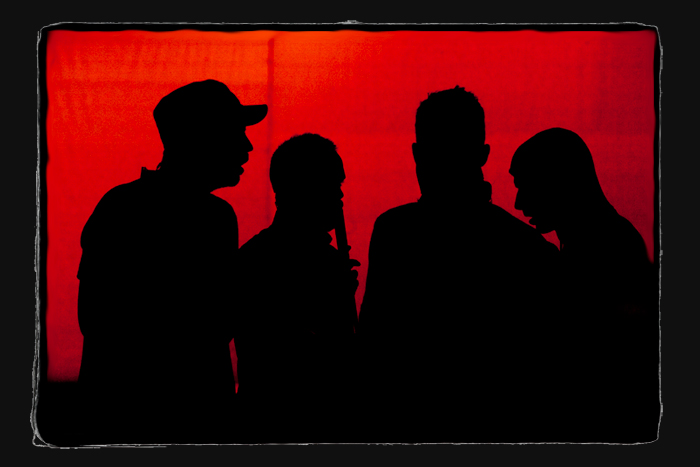 The simple awareness of G-Day approaching was enough to get the nerves right up. These situations can be an interesting chance to watch and learn how the band relationships work. There’s a nervy moment during Yellow. It’s unclear whether someone’s instrument has cut out, or whether they’ve decided that it just feels wrong, but the musician in question is pulling it over their head and reaching for the spare. This leaves a pretty big hole in the sound.

Will shouts into his vocal mic, “Drum solo!” laughing and pulling out a couple of ridiculously over the top fills. When the spare instrument is back on, it transpires that it’s tuned for another song, making the re-joining band-member sound some way out. “Key Change!” yells Mr Champion. 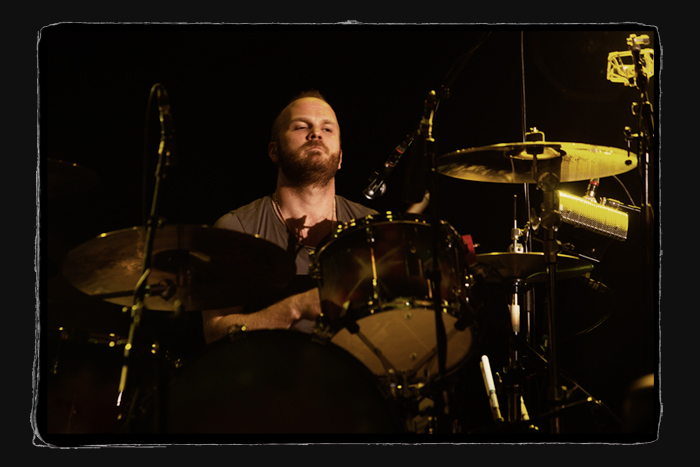 It’s over in a flash, but illustrates another side to Will that people might not always see. He sometimes gets seen as rather stern or even intimidating, but that’s completely unfair. He’s always the most solid, the handbrake that will prevent the band from sliding back downhill. He’s simply not going to allow the stress to put a black cloud over things today. His irrepressibly upbeat vibe today is a huge show of the strength in the face of mounting stress.

Despite having received a mass email entitled “Glastonbury set list – Final” almost a week prior, the show day conversations were all about the uncertainties and rumours of setlist alterations. Is Jay joining us? Are they adding that song? Have they sped this up? Are we doing that bit between these songs, or going straight into that? It’s mainly tiny details, but all stuff that needs programming and prep for the different departments involved.

There’s a crew meeting at 7 to put the final word on every detail of the show. Somewhat fittingly, this meeting (to put an end to all the last minute changes) is rescheduled for 7.15 and then 7.45 and finally happens around 8pm. Afterwards, I go out to watch Elbow from my rig at stage left.

The sound of this many people singing together just cannot fail to affect you emotionally. The nerves are starting to be eroded by a sense that it’s a very glorious event that we’re a part of. It’s dangerous of course, to focus on any other feeling than “don’t fuck this up” because after all, that’s the most important sentiment for the crew right now. Somehow though, I can’t help but realise quite how special this is.

You folks probably had a better view of the gig than us, thanks to the glorious BBC coverage, so a blow-by-blow account is unneccesary. Mention must be made though, of the video department, who played an absolute blinder, painting the pyramid with light in a genuine Glastonbury first. They were on site for days beforehand building projector towers, lining things up and generally going the extra mile. I haven’t spoken to a single person who doesn’t think it spectacularly worthwhile.

My own highlight though, was something that came about completely without forethought or planning. During Everything’s Not Lost, the stage was bathed in a purple-y ultra-violet look. I looked out across the crowd for the massed singalong and every hand was in the air. Each of these pairs hands carried a security wristband that had allowed people onsite. These happened to be luminous, meaning that the UV lights turned the audience into a huge purple field of waving phosphorescent limbs.

And I wasn’t even hammered…

There were highlights and special moments galore. The endearing fuck-up in Us Against The World, the sound of the massed voices in Fix You – complete with the view of the campfires leading way off up to the horizon. For me, watching the fellas bow at the close of the set to the deafening sound of the Viva chant (from what must be its biggest ever choir), confirmed an unequivocal sense of Mission Accomplished.

Backstage following the gig felt like a family Christmas. Even people who had spoken to each other moments before the show started, are greeting each other with hugs and back rubs as though they’ve not seen each other for years and they’re overjoyed to find each other still alive.

Elbow are clinking bottles with broad grins, Jay-Z and B are casually sat on a flightcase by the dressing room, Tim Wheeler from Ash is all smiles. The crew arrive in waves as they finish their trucks, grinning their way through the crowd in search of cold beers.

Inevitably, the mood is huge relief and not a little “what happens now?”. Some folks collapse in a heap, some are clearly in for a long night. All are overjoyed that’s it’s gone so remarkably well.

The following morning, I nip to the train station alone to join the great unwashed for the trip home. Next to me on the platform is a gang of mudsoaked folks who’ve come to the festival to celebrate finishing their exams. I realise that for me, having got through the one show that’s been hanging over us all for months makes today feel like the end of my finals.

We’ve still got a huge amount of work ahead of us, obviously; the tour is very much only beginning. The huge sense of pressure and expectation though, has passed – or at the very least temporarily dissipated. I’d almost forgotten how it felt to not be preparing for this.

Sorry it’s been a while since I wrote. I really have been pretty busy though…

Venice, Pinkpop and just one candle