So there we have it folks. There goes the final whistle. The fat lady has sung and the world’s Vida has been well and truly Viva-ed.

Summing up two years of your life in a few words is a little like trying to mow a lawn using only scissors. I could try, but I’d pretty soon have sore fingers and give up. All I know is that I’m ready for a day or two of sleep…

Off the top of my head, I’d say that I’ll remember this campaign as the one where Coldplay finally made friends with stadium gigs. They haven’t joined the old guard in the greatest hits shows just yet. They also haven’t joined the stadium rock arms race of selling tickets on the strength of “having a longer power cable than The Stones used on their 1998 tour – previously the most extensive  stretch of copper used on a rock show…”

All of this, of course, may still be to come – and why not? That stuff is fun. This time out, though, it’s been about the songs. This most recent record has some of their strongest ever work on it. Every night was a celebration of the tunes – and what a party we’ve had…

Pulling the zoom inwards on the most recent leg, I can honestly say that every audience was superb. Outdoor shows also make a lot of sense under balmy warm skies – particularly with a wonderfully crazy bunch of the most passionate folks on earth going berserk on a nightly basis.

I would say it was one of the most punishing schedules undertaken on this tour – not a single proper day off from first show to flight home. But I have a feeling that the version of myself that did the “London–>LA Grammys–>Japanese tour–>London Brits–>Australia” ten day pinball mission would have something to say about that.

Focussing more tightly, the final show saw some superb wardrobe – not from the band, but from the crew. Folks who regularly have to dive on and off stage to do their jobs are usually requested to dress all in black and wear baseball caps or other head-wear. Tonight, in celebration of our Mexican hosts, the seven crew-folks most often on the stage during the gig have adopted the Mariachi look. 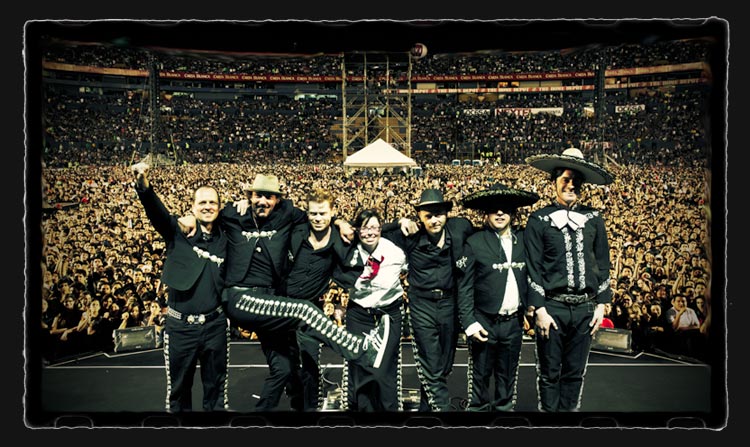 Bets were taken on whether the outfits would stay on for the entire show – which of course they did. Neill, in particular, looked superb down on the C-stage encouraging the crowd to give it their all on the “Olé, Olé Olé Olé” bit.

We sat in the airport waiting to board and Chris recounted how it looked seeing Neill’s sombrero loom up out of the darkness every so often through the gig. Vicki, one of the band’s lovely assistants, says she’s willing to bet a not insubstantial sum, that Neill is wearing it for the flight home. We round the corner to the gate and find out that Ms. Taylor has just earned herself a nice end of tour bonus.

I think part of the reason that I’m not as emotional and philosophical about the end of the Viva era (besides the fact that we’ve been on a trial separation since Wembley) is that everyone is so excited about what’s coming next. You could forgive the fellas for scattering from the end of the tour and going to enjoy the spoils for a little time before re-grouping and lazily putting together something new. This being Coldplay, though, we arrive home on Saturday and I can’t see the Beehive getting any peace from Monday onwards.

We’re talking about folks that really don’t HAVE to go to work, let alone work as hard as they do. The only thing that you can conclude is that hearing the new stuff take shape is the most exciting thing they can think of to do. Well, you could also conclude that they’re a little bit mental – and you might be a little bit right – but I can’t wait either, so it’s plainly a widespread affliction.

It also doesn’t feel over for me because I’ll be right here keeping you posted on what’s going on inside the Beehive. It’s not the end, we’re just losing the nice weather for a while.

See you in the studio…